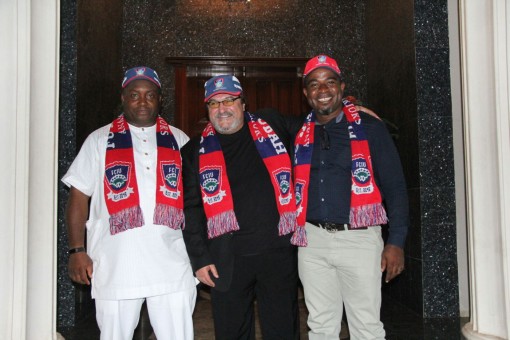 Bulgarian Coach, Dobrev (middle) at his unveiling to Ifeanyi Mbah FC fans at the Agege Stadium in Lagos on Sunday, 24 Jan, 2015.

The Bulgarian who handled Heartland of Owerri in 2007/2008 season as well as Accra Hearts of Oak was unveiled to fans and supporters of the club on Sunday during a pre-season friendly match against Mountain of Fire (MFM) side at the Agege stadium in Lagos.

He was at the helm of technical matters at the club at the start of last season, but was eased out following the change of ownership later on despite impressive performances and results.

Meanwhille, Ifeanyi Ubah FC defeated newly promoted MFM FC in the pre-season tie by 1-0. Both Ifeanyi Ubah and MFM are using the game to prepare ahead of the new NPFL season which kicks off 31 January across centres in the country.

It was an interesting game as fans thronged the Agege stadium to see IIfeanyi Ubah FC trade tackles with NPFL newcomers.

He said the Nnewi—based club is ready for the new league season.

“I am really happy we got a win against MFM. You can see it’s not an easy game. The injection of these Brazillian players will no doubt add value to the club when the season begins. I think we are ready for the new league season and our target is to win the league and qualify for the continental,” said Chukwuma Ubah, Chairman, Ifeanyi Ubah FC.