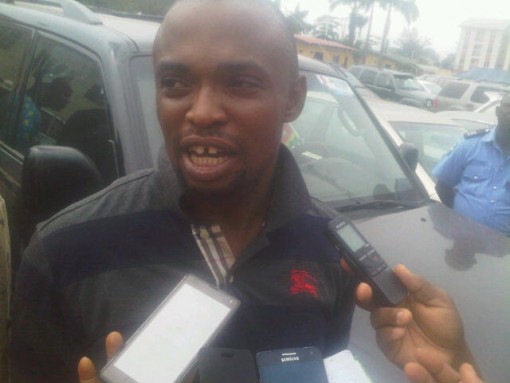 An automobile dealer, Osas Felix Bright, has confessed that he buys stolen vehicles from robbers and gave one of such SUVs to a pastor to pray for his barren wife to conceive in Lagos State, western Nigeria.

Bright was arrested along with the pastor, Titus Onwuchekwa who received the stolen SUV as gift.

Bright made the confession when they were paraded by the State Commissioner of Police, Fatai Owoseni last week.

The police also recovered 18 stolen vehicles of various brands from the suspects.

Delta Stat- born Bright also revealed that he did not tell his wife that he was buying stolen vehicles from robbers.

He explained that she only knew him as a genuine auto dealer at Berger.

“My wife does not know that I buy stolen vehicles. She got to know after I was arrested,” Bright said.

Bright also confessed that he knew that suppliers of the recovered vehicles were car snatchers because he buys the SUVs at give-away prices.

Pastor Titus Onwuchekwa of the Presbyterian Church, Umuahia in Abia State, was arrested along with other suspects, Bola Salami, 30, Opeyemi Aregbesola, 28, Chibuike Umeh, 22, and Ndibe Samuel by the Lagos State Commissioner of Police, Fatai Owoseni.

Bright said that Pastor Onwuchekwa did not know that the SUV he gave to him was stolen, but he committed himself when he contacted him again and was demanding to buy another car (Toyota Camry) for N250,000.

He said unknown to Onwuchekwa, he (Bright) was already in police custody, adding that it was when the pastor came to Lagos to buy the Toyota Camry he was also arrested.

Onwuchekwa said that he did not know that the SUV was stolen.

Other suspected criminals paraded by CP Oweseni made confessed committing crimes such as kidnapping, fraud, robbery among others.