I was initiated into cultism in prison— suspect 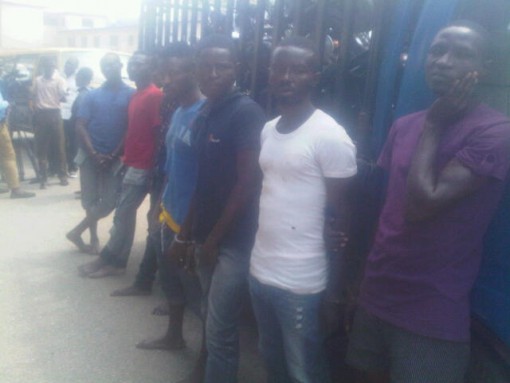 Faces of suspected cult members paraded by the police in Lagos

A 22-year-old youth arrested for his alleged involvement in cultism has confessed that he was initiated into it in prison custody at Ikoyi in Lagos State, western Nigeria.
The suspect, Ayodeji Bakare, was among the eight suspects paraded by the police on Monday by the State Commissioner of Police, Lagos State Command, Fatai Owoseni.
Bakare revealed that he was initiated into a cult called Awawa Boys through the assistance of inmates who are members.
He said the journey started in 2011 when he was arrested and remanded in prison on waiting trial and was released in 2013 for alleged robbery.
He said when he was leaving the prison, he was given a contact where he will get arms such as guns, bullets and charms to operate.
Bakare said through the contact, he went to Oyingbo in Yaba where they brought a pistol and sold it to him for N20,000.
Osun state-born Bakare said since he was released from custody, he has been involved in cult activities in Lagos State and its environs.
Among those arrested with Bakare include their leader, Tanimola Ogbere popularly known as Who Knows Tomorrow, in Bariga axis for his alleged cult activities.
Others are Richard Abayomi, 30, Richard Ewa, 31, Kayode Dada, 25, and Afex Olajide Fagunwa, 32, Nurudeen Lateef, 22, and Mohammed Musa, 28.
The suspects were arrested after they allegedly caused havoc in Bariga by setting a house ablaze along with a woman during a reprisal attack.
Fracas broke out after a rival cult led by Ibrahim who is now at large, reportedly killed Benmbo and Abiye.
In retaliation a faction led by Ogbere fought back and it resulted in burning of houses and death of a woman in the area.