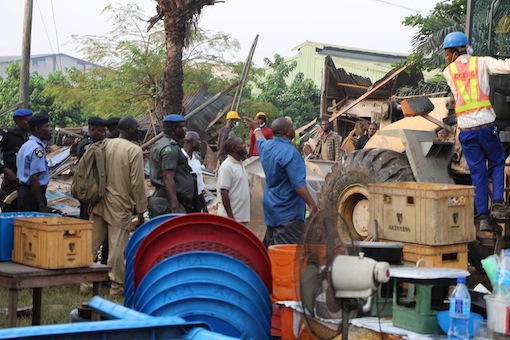 Nigerian artistes have called for the removal of the General Manager of the National Theatre of Nigeria, Kabiru Yusuf Yar’Adua, following the invasion of the Artiste Village on 23 January.

In a statement titled: “REPORT ON THE INVASION OF THE NATIONAL COUNCIL FOR ARTS AND CULTURE ARTISTS’ VILLAGE ON SATURDAY
23RD OF JANUARY, 2016”, presented on Tuesday, January 26, at the press conference called by the Nobel laureate, Professor Wole Soyinka to address the demolition of the Artists Village, they urged Minister of Information and Culture, Lai Mohammed to remove Yar Adua following his role in the destruction of the village.

According to the report by Aremo Tope Babayemi, Coordinator, NCAC Artists’ Village, “on Saturday, 23 January, 2016 at about 6:00 am, the General Manager of the National Theatre of Nigeria, Kabiru Yusuf Yar Adua invaded the National Council for Arts and Culture Artiste’ Village which houses arts studios, workshops, dance studios and some service contractors with a caterpillar from CCECC and two truckloads of armed policemen.

The padlock and chain used to lock the gate were broken and Kabiru entered the premises with his Demolition Squad. The noise generated by the forceful entry attracted the attention of the Residents who watched as Kabiru and his team which included ‘thespians’ such as Steph Ogundele and Biodun Abe, ordered the demolition of arts and dance studios, galleries and restaurants servicing the community. Some of the demolished structures belonged to the NCAC whilst others built by artists had approval of the NCAC.

The NCAC is one of the parastatals in the Federal Ministry of Information and Culture and the NCAC Artists Village is one of her flagship projects. The NCAC policy that established the Artists Village has turned out to be one of the best policies to have come out of the Public Sector in Nigeria because it clearly demonstrates trickledown of government spending in the arts. This is critical because research grants, travel grants and support for new work and productions from government have all but dried up.

The Resident Arts practitioners who represent some of the best in practice in the Nigerian culture scene had no prior notice of the exercise and our landlord, the NCAC was not informed. Kabiru carried out his vindictive demolition without allowing the Artistes and Business owners the opportunity to salvage artworks and belongings and as a result caused extensive damage to property and valuables.

One of the Artists Mr. Smart Ovwie a sculptor who arrived the scene later and saw the destruction of his properties lamented to Kabiru asking what he did to be oppressed this way, in response, the policemen harassed him and fired shots which sent bullets that got Mr. Ovwie in the leg.

It was truly tragic to see Government officials who have been statutory responsibility to promote and develop the Arts and Culture brutalizing Artists and destroying Government property with impunity. It was indeed a clear manifestation of the misrule that Nigerians have been subjected to in recent years

Later that day, the Honorable Minister for Information and Culture came to address and reassure the Resident Artists of the NCAC Artists Village. He promised that the injured will get support for their treatment in hospital and that those who are legitimate residents will be duly compensated for damage done to their structures. The Honourable Minister confirmed that he asked Kabiru to demolish shanties at the back of the Artists’ Village along the canal that has been a route for miscreants and not Arts Studios and structures in the NCAC Artists’ Village.

NCAC said: “We wish to use this opportunity to thank the Honourable Minister for demonstrating a remarkably responsive leadership and for his assurances. We feel a lot better after the trauma of the experience and we have him to thank for that. We are taking active steps to deescalate tensions in the environment in our belief that due and just process will take its cause.

“It is important to inform at this point that Kabiru hid behind the orders of the Honourable Minister to settle old scores with a Community of Artists that stood staunchly against the plans of the last administration to privatize or concession off the management of the National Theatre of Nigeria.

1. That the Honourable Minister of Information and Culture makes good on his promise regarding injuries to affected residents and damages to property.

2. That temporary accommodation be provided for artists whose structures have been demolished pending compensation and rebuilding of such structures. The offices of the National Film Corporation (NFC) and the Centre for Black Arts and Africa Civilization (CBAAC) at the National Theatre are vacant. We implore the Honourable Minister to use his good offices to relocate the displaced Artists and their materials and works to these offices.

3. That the Honourable Minister takes active steps to stop Kabiru Yusuf Yar’Adua from further preventing the National Council for Arts and Culture from carrying out her statutory obligations to Artists and the Arts Community.

4. That the Honourable Minister should as a matter of urgency, remove Kabiru Yusuf Yar’Adua from office as he has become an embarrassment to the current administration. The Nigerian Culture Sector is already in deep crisis as a result of a lack of leadership and direction from the Public Sector. Kabiru must be prevented from further demonstrating vestiges of misrule which characterized the last Administration.