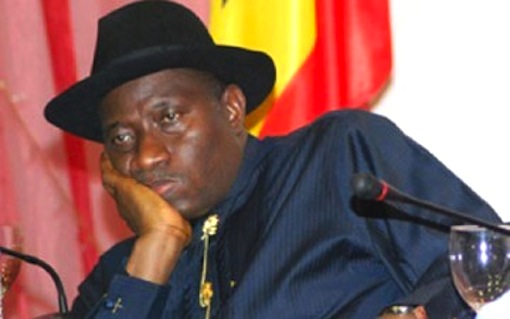 The Economist has described former Nigerian president, Goodluck Jonathan, an ineffectual buffoon in an article titled: “Cheap oil is causing a currency crisis in Nigeria. Banning imports is no solution”

In the article which an analysis of President Muhammadu Buhari’s administration and policies, The Economist took a dig at Jonathan and how he managed Nigeria.

Read “Cheap oil is causing a currency crisis in Nigeria. Banning imports is no solution” below:

More than 30 years ago, a young general swept to power in the fifth of Nigeria’s military coups since independence in 1960. The country he inherited was a mess: bled dry by pilfering politicians within and hammered by falling oil prices without. Last year that general, Muhammadu Buhari, became president again—this time in a democratic vote. The problems he has inherited are almost identical. So are many of his responses.

In the eight months since Mr Buhari arrived at Aso Rock, the presidential digs, the homicidal jihadists of Boko Haram have been pushed back into the bush along Nigeria’s borders. The government has cracked down on corruption, which had flourished under the previous president, Goodluck Jonathan, an ineffectual buffoon who let politicians and their cronies fill their pockets with impunity. Lai Mohammed, a minister, reckons that just 55 people stole $6.8 billion from the public purse over seven recent years.

Mr Buhari, who—unusually among Nigeria’s political grandees—is said to have just $150,000 and a couple of hundred cattle to his name, abhors such excess. As military ruler he jailed, fired or forced into retirement thousands of bureaucrats whose fingers had been in the till. This time, the Economic and Financial Crimes Commission (EFCC) has arrested dozens of bigwigs, including a former national security chief accused of diverting $2.2 billion. The EFCC has a poor record of securing convictions; but a single treasury account has been introduced to try to stop civil servants siphoning off cash. And agencies which may not be remitting their fair share to the state are having their books trawled by Kemi Adeosun, the finance minister.

Such measures are doubly important because the economy is swooning along with the oil price. The sticky stuff directly accounts for only 10% of GDP, but for 70% of government revenue and almost all of Nigeria’s foreign earnings.

Oil’s price has fallen by half, to $32 a barrel, in the months since the new government came to power, sending its revenues plummeting. Income for the third quarter of 2015 was almost 30% lower than for the same period the year before, and foreign reserves have dwindled by $9 billion in 18 months. Ordinarily there would be buffers to cushion against such shocks, but Mr Jonathan’s cronies have largely squandered them. Growth was about 3% in 2015, almost half the rate of the year before and barely enough to keep pace with the population. The stockmarket is down by half from its peak in 2014.

Domestic oil producers are feeling the pinch worst. Many borrowed heavily to buy oilfields when crude was worth more than $100 a barrel, and are now struggling to pay the interest on loans, says Kola Karim, the founder of Shoreline Group, a Nigerian conglomerate. This, in turn, threatens to create a banking crisis. About 20% of Nigerian banks’ loans were made to oil and gas producers (along with another 4% to underperforming power companies). Capital cushions are plumper than they were during an earlier banking crisis in 2009; but, even so, bad debts are mounting and banks that are exposed to oil producers may find themselves in trouble. “It wouldn’t surprise me if one or two went down,” says a senior banker in Nigeria.

The government’s response to the crisis has been three-pronged. First, it is trying to stimulate the economy with a mildly expansionary budget. At the same time, it is trying to protect its dwindling hard-currency reserves by blocking imports. Third, it is trying to suppress inflation by keeping the currency, the naira, pegged at 197-199 to the dollar. Only the first of these policies seems likely to work.

The budget, which includes a plan to spend more on badly needed infrastructure, is a step in the right direction. Although government revenues are under pressure from the falling oil price, Mr Buhari hopes to offset that by plugging “leakages” (a polite term for theft) and taxing people and businesses more. That seems reasonable. At 7%, Nigeria’s tax-to-GDP ratio is pitifully low. Every percentage point increase could yield $5 billion of extra cash for the coffers, reckons Kayode Akindele of TIA Capital, an investment firm. Mr Buhari also plans to save some $5 billion-$7 billion a year by ending fuel subsidies—a crucial reform, if he sticks with it. Even so he will be left with a deficit of $15 billion (3% of GDP) that will have to be filled by domestic and foreign borrowing.

Yet his policies on the currency seem likely to stymie that. The central bank has frozen the naira at its current overvalued official rate for almost a year. The various import bans (on everything from soap to ballpoint pens) are supposed to reduce demand for dollars, but have little effect. Businesses that have to import essential supplies to keep their factories running complain that they have been forced into the black market, where the naira currently trades at 300 or more to the dollar. Several local manufacturers have suspended operations. International investors, knowing that the value of their assets could tumble, have slammed on the brakes and some have pulled money out of the country just as their dollars are most needed (see chart).

Nigeria is fortunate in having low levels of public debt (less than 20% of GDP), but it is not helped by high interest rates, which mean that 35% of government revenue goes straight out of the door again to service its borrowings. It would not take much to push it into a debt crisis.

Frustratingly, this crunch is one that Nigeria has been through before—under the then youthful Mr Buhari. Then, as now, he refused to let the market set the value of the currency. Instead he shut out imports, causing the legal import trade to fall by almost 50% and killing much of Nigeria’s nascent industry in the process. Between 1980 and 1990, carmaking fell by almost 90%. Today, as in the 1980s, the president is making a bad situation worse.

From The Economist print edition: Middle East and Africa