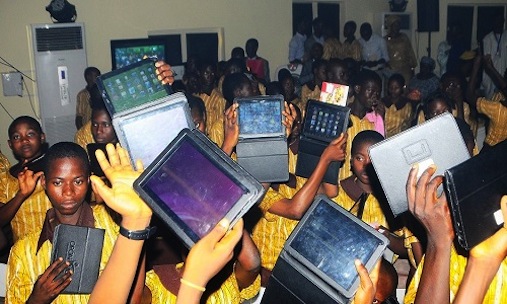 The Vice Chancellor of the University of Ilorin, Prof AbulGaniy Ambali, has revealed how the introduction of the stand-alone Tablet of Knowledge (Opon Imo) into schools by the Osun state government influenced the decision by his institution to make it mandatory for every undergraduate of the university to have a tablet in the school.

He said the university authorities realised that by the time pupils coming to universities from schools such as those in Osun would be gaining admissions, they would have been so advanced in the use of modern technology devices for learning that to bring them to any standards lesser than that would be a deservice to their orientations.

The Vice Chancellor, who stated this during his visit to the Governor of Osun, Ogbeni Rauf Aregbesola in Osogbo, revealed how the university’s adoption of technology had helped it advanced the course of leaning commending the Governor for having the vision to introduce Osun pupils to technology.

“Opon Imo influenced our decision to procure tablets for all our students. This is why even at the University of Ilorin, you will not see any board other than electronic boards in our lecture rooms. In our Senate, we operate a paperless Senate.” the VC said.

Ambali told Aregbesola that the University of Ilorin is the most patronized at the moment with about 107,000 applicants applying to the institution in the last admission exercise.

He told Aregbesola that at least, 12 per cent of the total intake of the university are indigenes of Osun.

He added that Osun indigenes who are also in the employment of the university have displayed a high level of commitment, competence and handwork.

Aregbesola, who commended what he called “the stable academic calendar” of the institution, said it was gratifying that the institution got its inspiration to introduce computer tablets for learning.

“I am happy that the university is not doing badly at all. And I wish to commend your commitment to modernization and knowledge tradition because we are in a knowledge-based society. What it means therefore is that you need technology which is the way of instant knowledge dissemination and whoever is not into that is not existing.

“The way things change in the current world order is such that it is not enough to be computer-compliant but follow the trend. What is relevant today may not be relevant tomorrow

“I am impressed by your adoption of tablet which is the easiest device to hold today for knowledge seeking, communication and all manners of potentials.

“That you have introduced and made compulsory tablets is a feat that must be commended,” Aregbesola told the visiting Vice chancellor
and his team.

He also commended the partnership with Samsung saying the varsity has bridged the digital divide.

He said with the works going into education rebuilding in Osun, the university should not be surprised if in no time, at least, Osun takes up to 50% of the total intake of the university.

Considering areas of potential partnership with the university, Aregbesola listed agriculture which he said is the major focus of his administration, as one sector where his government and the authorities of the university will have enter into partnership.

The governor said his government’s school feeding program (O’MEAL) relies solely on local agricultural productions, adding that the university is also forward-looking with its growing of Teak tree for future revenues.

Aregbesola said if there is a message that the current dislocation of the global economy preaches, it is that Nigerians cannot continue to rely on oil as a source of revenue.

“We are disconnected from where the oil is being prospected and that means we must diversify. The central focus of a nation like our own considering our history and background is agriculture. That is why I consider your Teak plantation as most fascinating of what you are doing saying. It is a guarantee for future wealth,” he said.