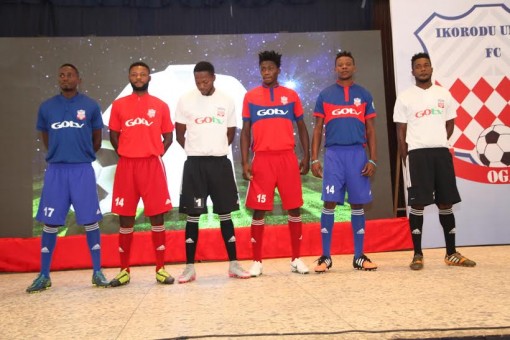 An innovation was brought into Nigerian club football when the newly promoted to the Globacom sponsored Nigeria Professional Football League (NPFL), Ikorodu United, were officially unveiled to the Nigerian public Thursday in Lagos.

The colourful event which was held at the Town Hall of Ikorodu was attended by the creme of Nigerian football including some former Super Eagles players.

Ikorodu United, founded in 2014, who are 100 percent privately-owned, with the board led by businessman ‘Dewumi Ogunsanya, Chairman of Multichoice Nigeria, will be wholly sponsored in the new season by GOtv Nigeria.

The unveiling ceremony, the first of its kind to be organised for a Nigerian club, was unique in terms of packaging and organisation.

The players and coaches of the team, uniformly dressed in black suit with red ties, were introduced to the public after which the home and away jersies to be used in the new season were also launched.

The club chairman, described the promotion of the club to the elite league as a teamwork from the board, the coaches, players and the teeming fans, who stoutly believe in the vision of the founders of Ikorodu United.

He said the team are poised to take the Glo League by storm with series of innovations that will change the face of Nigerian club football.

One of such innovations is the plan to rebrand the home venue of the club, Onikan Stadium, with intention of bringing back the lost glory of the stadium on Lagos Island. He also disclosed that Ikorodu United would be run proffessionally as it is being done in the advanced leagues in the world.

“Our plan is to take the ancient town of Ikorodu to the world limelight with the successes of this club in the nearest future. The beauty of what we are doing is that we are already having high demands for our tickets for the new season and we plan to make every match at the Onikan stadium a family funfare.

“We want to have a situation where the stadium will be filled by 12 noon for a match scheduled for 4pm. Football is a big business and we want to teach Nigerians how best to make business out of the round leather game,” the chairman said.

Chairman of Lagos State Football Asoociation (LSFA), who is also the First Vice President of the Nigeria Football Federation (NFF), Seyi Akinwunmi expressed the joy of the people and government of Lagos seeing Ikorodu United and Mountain of Fire Ministries (MFM) Football Club flying the flag of the state in the elite league.

He assured the club of all support from the FA, adding that with the unveiling “Ikorodu will never be the same again.”

Sani Irabor, former chairman of League Management Company (LMC) praised the board of Ikorodu United for bringing to reality the dream of the LMC under him, which is to see Nigerian club solely owned by private individuals rather than governments as it is now.

“Football cannot be sustained by government ownership. Ikorodu United’s vision is the model we talked about having individuals and community owning clubs in Nigeria. Money alone cannot make a successful club, it needs the soul of the people to drive it. I hope the managment of Ikorodu United will engage the people of Ikorodu community to take the club to its heights,” Irabor said.