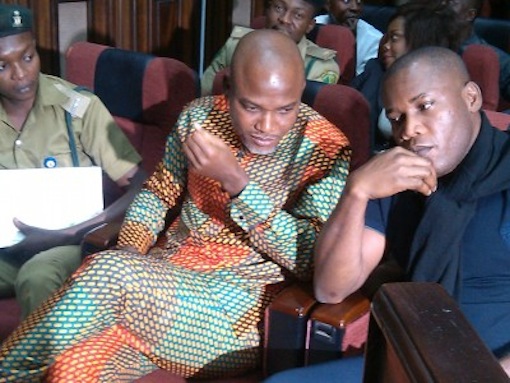 Justice James Tsoho of Federal High Court, Abuja dashed the hopes of early release from prison of Nnamdi Kanu, the leader of Indigenous People of Biafra and director of Radio Biafra as he denied his bail application Friday.

Kanu, who was arrested by officials of Department of State Service, DSS, is being tried on charges of treasonable felony alongside two other pro-Biafra agitators, Benjamin Madubugwu and David Nwawuisi by the Federal Government.

The Judge ordered that the three accused persons should be remanded in Kuje prison pending the commencement of their accelerated trial which he fixed to begin on 9 February, 2016.

In his ruling on the bail application, Justice Tsoho said contrary to the argument of the defence counsel, the Administration of Criminal Justice Act 2015 has not taken away the discretionary power of the court to grant bail.

The Judge also said though Kanu has been granted bail by Justice Adeniyi Ademola of Federal High Court and his court should be bound to do the same thing, the circumstances of the case before him are different.

Justice Tsoho also noted that the prosecution has provided enough proof of evidence to support the claim that the defendants do not deserve bail.

According to him, the prosecution has shown that the the activities of Kanu and his co accused constitute a threat to national security.

On the other hand, the Judge said the argument of the defence counsel is that the defendants’ action constitutes agitation and dissent.

Justice Tsoho noted that the offence of the treasonable felony Kanu and his two co accused are charged with attracts the punishment of imprisonment for life and is prejudicial to national security.

He added that the Supreme Court has ruled that when national security is threatened or is at the risk of being threatened, then the issue of human rights must be suspended.

He also noted that the prosecution has presented evidence to the court that Kanu, who is the main accused may run out of the country if granted bail because he holds dual nationality and is in possesion of Nigeria and British passports.

Chuka Momah, (SAN) the lead counsel to Kanu and his co-accused however said his clients may challenge the decision at the Court of Appeal.

The Federal Government had last Wednesday docked Kanu and his two co-accused on a six-count criminal charge bordering on treasonable felony.

The three accused pleaded not guilty to the charge, which was signed by the Director of Public Prosecution, DPP, Mr. Mohammed Diri.

The Federal Government had alleged that the accused persons committed treasonable felony by spear-heading an illegal agitation for the seccession of ‘Biafra Republic’ from Nigeria, an offence punishable under Section 41(C) of the Criminal Code Act, CAP C38 Laws of the Federation of Nigeria.

The Federal Government also alleged that the accused persons managed the affairs of the IPOB, which it described as ‘an unlawful society’.

One of the charges against the accused persons read: “That you, Nnamdi Kanu and other unknown persons, now at large, at London, United Kingdom, between 2014 and September, 2015, with intention to levy war against Nigeria in order to force the President to change his measures of being the President of the Federation, Head of State and Commander-in-Chief of the Armed Forces of the Federation as defined in Section 3 of the Constitution of the Federal Republic of Nigeria 1999 (as amended) by doing an act to wit: Broadcast on Radio Biafra your preparations for the states in the South-East geo-political zone, South-South geo-political zone, the Igala Community of Kogi State and the Idoma/Igede Community of Benue State to secede from the Federal Republic of Nigeria and form themselves into a Republic of Biafra, and thereby committed an offence punishable under Section 41(C) of the Criminal Code Act, CAP C38 Laws of the Federation of Nigeria 2004.”

The IPOB leader was arrested on 1 October, 2015 in Lagos shortly after he arrived from the United Kingdom.

He was subsequently arraigned before a Chief Magistrates’ Court in Abuja over allegations bordering on criminal conspiracy and managing and belonging to an unlawful society.

He pleaded not guilty to the charge and was eventually granted bail to the tune of N2 million, but he was not released from the detention of DSS he has been since his arrest.

The Federal Government later withdrew the matter and the Magistrate Court subsequently struck out the charge, even as it discharged the accused person.

Justice Adeniyi of Federal High Court, Abuja had on December 17, ordered the ‘unconditional’ release of Kanu, from the custody of the DSS based on the applications for fundamental rights enforcement by his lawyer.

DSS however ignored the order, but instead arraigned Kanu on fresh charges of treasonable felony on December 23, 2015, before Justice Ahmed Mohammed of Federal High Court, Abuja.

Kanu declined to enter his plea to the charges when he was arraigned before Justice Ahmed Mohammed of the high court.

He claimed that he will not get justice from the court. The Judge consequently washed his hands off the case.

In a bench ruling delivered last week, Justice Tsoho ordered that Kanu and his co- accused should be remanded in prison custody.

Lawyers to the accused had complained that they have no access to them at the DSS detention facility.