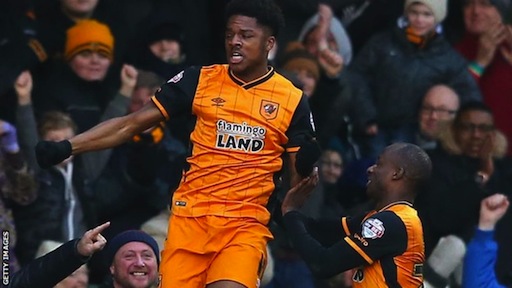 Chuba Akpom scored a hat-trick as Hull breezed into the fifth round of the FA Cup with a comprehensive win at Bury.

Akpom – who had four goals in his career before the game – opened his account from 15 yards after Ian Lawlor had saved from David Meyler.

The 20-year-old scored his second from the penalty spot after Sone Aluko was fouled.

Akpom completed his treble with a superb run and finish before Craig Jones hit a consolation late on.

Hull – who reached the final in 2014 and were 2-0 up against Arsenal before losing in extra time – were worthy winners but Bury were left to rue a decisive minute with the scores at 1-0.

Shakers sub Ryan Lowe had a goal ruled out for offside and moments later Hull doubled their lead when Aluko was brought down for a penalty.

Meyler stepped up and placed the ball on the spot but captain Michael Dawson intervened and gave the ball to the on-loan Arsenal striker.