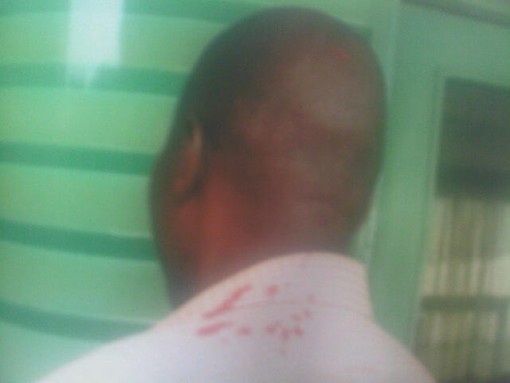 Inspector Balogun Johnson battered while on lawful duty by suspects

A Police Inspector serving at Igando Division, Balogun Johnson, was battered recently while he was performing his official duty in Lagos State, western Nigeria.
Two suspects, Dada Waliu, 24, and Joke Kazeem, 40, have been arrested and charged before Ejigbo Magistrates’ court over the alleged assault.
The incident happened at Oduso compound in Akesan, a surburb of Lagos where the suspects reside.
Johnson suffered his fate after he was asked to invite the suspects to the station in connection with an alleged criminal offence they committed.
P.M.NEWS gathered that instead of the suspects following him to the station, they reportedly attacked Johnson.
While they were beating him, other people around joined them and beat him to a pulp.
They allegedly attacked Johnson with sticks, stones and bottles and in the process broke his head.
Johnson bled profusely before he was rushed to Igando hospital where he is being treated.
The matter was reported to the DPO who sent other officers to arrest the suspects.
Other suspects who participated in assaulting Johnson escaped and are now at large.
Waliu and Joke were charged to court with assault and obstruction of lawful duty under the Criminal Code.
They pleaded not guilty and the presiding Magistrate, Mrs J. O. E. Adeyemi granted them bail in the sum of N100,000 with two sureties in like sum.
They were remanded in prison custody at Kirikiri pending when they will perfect their bail condition.
The matter was adjourned till 8 February, 2016.