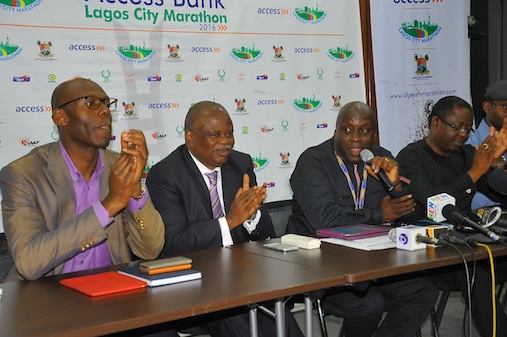 At least 50 elite athletes who are part of the star-cast for this weekend’s Access Bank Lagos City Marathon will arrive in the country on Thursday.

The General Manager for the marathon race, Yussuf Alli revealed that most of the expected athletes will be coming from Kenya, Ethiopia, Eritrea, Bahrain, Cameroon and Rwanda.

Alli further stated that the incoming athletes will drive straight to the Expo Centre of the Marathon race at the Teslim Balogun Stadium in Surulere, Lagos to collect their race bibs and numbers.

The athletes will also be received by Chairman of Lagos State Sports Commission and head of the organising committee of the event, Deji Tinubu.

“We are expecting the bulk of our elite athletes on Thursday from their respective bases. They are all eager to be here for the Lagos City Marathon,” Alli stated.

Top on the list of those expected in Lagos on Thursday is Kenya’s Josphat Kifanni Too who has a personal best time of 2.08.23secs.

Peter Kiplagat who won the 2015 Geneva Marathon is also expected from Kenya as well as his compatriot Sammy Kibet; winner of the 2011 Warsaw Marathon.

Abebe Negewo winner of the Rome 2012 Marathon is also expected from Ethiopia.

Meanwhile, organisers have confirmed that as many as 150 Nigerian elites, mostly from Jos will also be arriving in Lagos on Thursday.

Over 20,000 athletes are expected to feature in the 6 February marathon which is the first of its kind in over three decades.

About N92 million is up for grabs for marathoners who can run from the Old Lagos (National Stadium Surulere) to New Lagos (Eko Atlantic City), a distance of 42.195 kilometres.