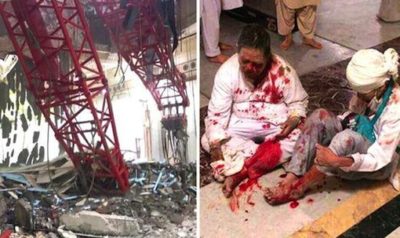 The National Hajj Commission of Nigeria (NAHCON), said Saudi Arabian was yet to pay compensation to families/victims of the crane mishap that occurred during the 2015 Hajj.

Dr Saleh Okenwa, the Commissioner of Planning, Research, Statistic, Information and Library Service of NAHCON, stated this in an interview with NAN in Abuja on Wednesday.

“NAHCON is yet to receive information about the compensation of victims of the crane crash from the Saudi authority.

“But the Nigerian Consulate in the Kingdom of Saudi Arabia is monitoring developments and Nigerians would be fully informed about any development.

“I am confident that the Saudi Arabian Government will keep to its promise because they are people of their words,” Okenwa said.

He added that NAHCON officials would be visiting Saudi Arabia in later in February to get an update on the issued.

Okenwa said the commission would meet officials of the Saudi Arabian Ministry of Hajj as part of efforts to ensure early preparation and success of the 2016 hajj.

Okenwa said the meeting was a follow up on the earlier ones held in Saudi to sign agreement with accommodation and food providers in Mecca and Medina.

NAN recalls that at least six Nigeria pilgrims lost their lives in the tragic crane incident that occurred at the Grand Mosque in Ka’abah, Mecca, Saudi Arabia on Sept. 11, 2015.

Similarly, 274 Nigerian pilgrims died during a stampede in Muna where the devil is traditionally and symbolically stoned by the pilgrims.

Also 35 pilgrims were declared missing during the 2015 hajj.