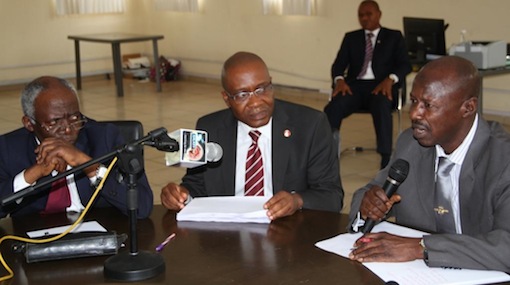 The acting Chairman of the Economic and Financial Crimes Commission, EFCC, Ibrahim Magu has stated his unalloyed commitment to the anti-graft war with a solemn declaration that he was prepared to make the supreme sacrifice to see that Nigeria is free from the grips of corruption. “I am not afraid of anything. I prefer to die fighting corruption if need be,” he declared.

The EFCC boss who spoke while receiving a group of lawyers with progressive inclinations who visited him in Lagos on February 18, commended them for their solidarity, adding that, it was such support that the Commission seeks from every patriotic Nigerians as the battle against corruption enters a delicate phase with corruption itself fighting back. The EFCC boss expressed regret that some unpatriotic Nigerians including senior lawyers have joined forces “with fraudsters and those who looted our commonwealth by becoming coaches and technical advisers on how to escape justice”.

Magu admonished lawyers to allow the interest of Nigeria and good conscience to guide them when accepting briefs.

Earlier Femi Falana, a Senior Advocate of Nigeria, SAN, who led the group, said they were in the Commission to express support for the EFCC and the chairman for revamping the fight against corruption.

He said though lawyers have been accused of attempting to frustrate the work of the Commission, there were however good lawyers who are ready to support the EFCC in advancing the fight against corruption. He urged the Commission should name and shame those who are frustrating the work rather than generalizing as there were still good lawyers and judges in the country. “Let us name and shame corrupt judges and lawyers.

The good ones are prepared to work with you, “he said. He warned lawyers who think they can intimidate the EFCC, that some of them are ready to support and defend the Commission.

Luke Aghanenu who also spoke at the event said the Commission should know that corruption will also fight back and the recent attack by some lawyers was a clear example. He said as long as the EFCC does it work rightly, people will always criticize the Commission.

On his part, Jiti Ogunye said the reason he is part of the solidarity visit, is his belief in the integrity of the EFCC chairman and his effort to revamp the fight against corruption. He condemned the activities of some lawyers who are castigating the EFCC as pure criminality and urged them not to hide under the cover of lawyer- client confidentiality to become accomplices to mega graft.

He assured the EFCC chairman that, they will continue to support the EFCC as long as it remains truthful and faithful to its mandate.