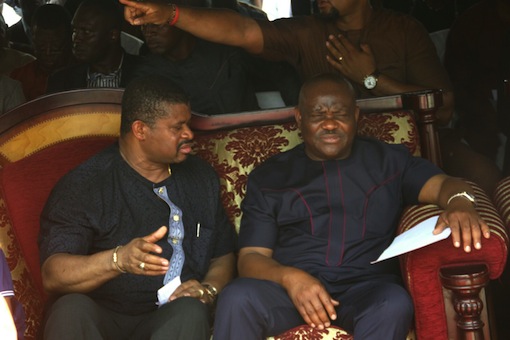 Rivers state governor, Nyesom Wike has alerted Nigerians that the Rivers APC chairman has written a letter to the Director General of the Department of State Services, DSS, and the Army High Command, requesting that prominent PDP leaders and members be arrested on the eve of the March 19, 2016 rerun legislative elections in the state.

Addressing thousands of PDP members at Luuwa in Khana Local Government Area during the 50th birthday of Senator Lee Maeba on Saturday, Wike said that he intercepted the letter by the Rivers State APC Chairman to the security agencies.

The governor reiterated that the people of the state will resist any attempt to use the security forces to rig the rerun elections.

According to him, no matter the level of intimidation and arrests of PDP members by the security forces, PDP will win the rerun legislative elections.

“We will support INEC to conduct free and fair elections, but nobody who rigs the election will go free,” he said.

He charged Ogoni people to vote all PDP candidates during the rerun elections so that the development process of his administration will be enhanced.

Wike urged the people of Rivers South East to vote Senator Olaka Nwogu who will defend the interest of the people at the national assembly.

According to him, Mr Magnus Abe who now moves around with soldiers and policemen to intimidate ordinary people, will only go to the National Assembly to work against the state, hence the people should vote against him.

He announced the take-over of the Primary Health Centre in the area by the state government as a birthday gift to Senator Lee Maeba.

In his remarks, Maeba assured Wike that the Ogoni people will always support his administration and the PDP.