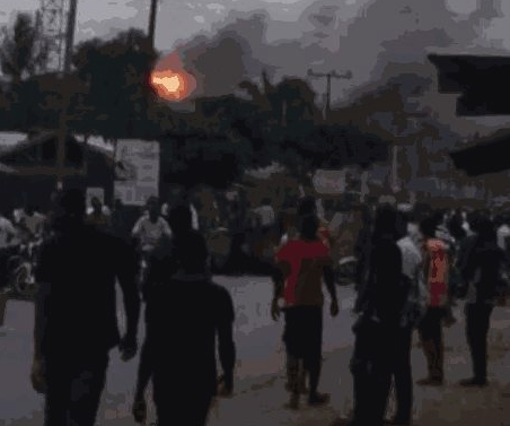 The liaison office built by Senator Magnus Abe for the All Progressives Congress, APC, in Rivers South East located in Bori, traditional headquarters of Ogoni people has been set ablaze by youths wielding dangerous weapons.

At the time of this report, the office could be seeing from a distance in flames.

Confirming the incident, one of aides to the senator, Kennedy Friday in Facebook post said “The South-East senatorial liaison office built by Senator Magnus Abe, the first of its kind in the history of Rivers South-East has been set on fire.

“The office is located in Bori, traditional headquarters of Ogoni people and headquarters of Rivers South-East Senatorial District. It employs more than 20 people who offer services in the complex. It’s the most architecturally exposing edifice in the area. It gave facelift to Bori.

According to Friday “As I type these words, the office complex has been set on fire by gun-wielding youths barely two days after Governor Nyesom Wike of Rivers State charged PDP supporters in Ogoni to stop Magnus Abe from being re-elected into the senate. The Governor made the comment at Luuwa community in Nyokhana, Ogoni, on Saturday the 20th of February, 2016, while addressing PDP supporters at the birthday ceremony of Sen. Lee Maeba.

“As I type these words, Bori is tensed,” he added.

“Wherever you are, please pray for Rivers State, pray for Ogoni,” Kennedy Friday said.

Meanwhile, earlier today ex-militant leader,’General Osama Bin Laden’ who has been declared wanted by the military for suspected gunrunning, kidnapping and other sundry offences attributed his travails to an unnamed top politicians of the APC.

Ndigbara who is on the run called into a Port Harcourt based radio station to plead innocence of crimes leveled against him.