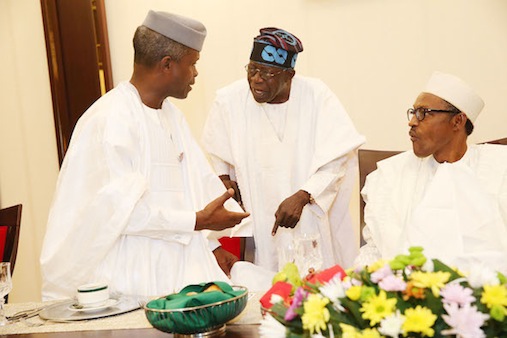 FILE PHOTO: President Muhammadu Buhari looks on as Bola Tinubu and Vice President, Yemi Osinbajo chat during the Presidential Dinner in honour of Senators at the State House in Abuja in 2015

Some top officials of the ruling APC met in Abuja on Wednesday to dialogue on certain matters concerning the party.

The meeting, which took place at the conference room of Vice President Yemi Osinbajo at the Aso Rock Villa, lasted for about four hours.

A statement by the Senior Special Assistant, Media and Publicity to the Vice President, Mr Laolu Akande, said the meeting also dwelt on resolving some national issues.

In the two paragraph statement, Akande said those in attendance were select leaders of the All Progressives Congress drawn from the party’s National Headquarters and the legislative and executive arms of government.

The statement described the event as “a consultative meeting on issues affecting the party and the nation”.

It said the meeting was very useful and resourceful towards achieving the goals of the party and the government.

Some of those in attendance were Chief Ahmed Tinubu, Chief Bisi Akande, Senate President Bukola Saraki, Speaker of the House of Representatives, Yakubu Dogora and his Deputy.

Others were former Vice President Atiku Abubakar, Secretary to the Government of the Federation, Mr David Lawal and a host of other representatives from APC controlled states.

The Vice President presided over the meeting.