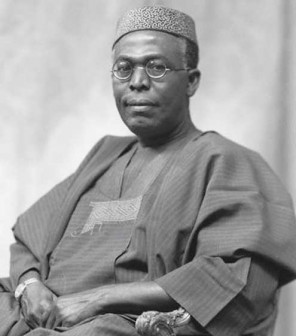 Governor Nasir el-Rufai of Kaduna state is to chair a one-day symposium to mark the annual commemorative birthday of late Chief Obafemi Awolowo, former Premier of the Western Region.

Awolowo died on 9 May, 1987 and the Obafemi Awolowo Foundation was set up in his honour.

The symposium which will be held on 3 March, according to the foundation’s Executive Director, Dr. Tokunbo Awolowo-Dosumu, during a pre-event press conference, is themed: “Awo, Then and Now: Politics, Economics and Education”.

Awolowo-Dosumu noted that the foundation was the intellectual legacy of the late Awolowo and as a result, plans to devote the symposium to an examination of several aspects his governance and legacy.

“As the title suggests, this symposium has a view to teasing out important lessons from Awolowo’s governance record in order to provide a compass for the nation’s ongoing journey to political, economic and social transformation.

“It should be noted that this is in keeping with the foundation’s forte of generating ideas, as well as provoking conversation to jumpstart national development.

“Nigeria’s fourth republic has witnessed important gains in the direction of democratic consolidation, not the least of which is the elections of 2015.

“Still, the country faces significant challenges. This event will subject our gains, challenges, setbacks and prospects to detailed examination, in order to chart a way forward.

READ: The world has sprinkling of saints, multitude of evil-doers – Awolowo

“We want the public opinion to be given a chance to be heard. We want to talk to the public and we want to hear from them. The electorate rarely express their views and they ask very little questions.

“This event provides the platform and allows everyone to speak their minds, then we roll out what the consensus appears to be,” she said.

The keynote address at the event, will be delivered by Professor Seun Gbadegesin, while the panelists are Oby Ezekwesili, Professor Williams Fawole, Professor Ayo Olukotun and Dr. Femi Okurounmu.

An Awo Memorial Kids Cup competition has also commenced in commemoration of the birthday.

She disclosed that the final match of this third edition of the competition is scheduled to be played at the Ajele Stadium, Lagos.