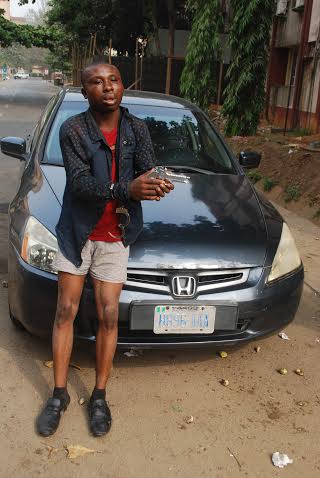 Operatives of the Rapid Response Squad (RRS) of the Lagos State Police Command have arrested Paul Bassey, 25, alleged to be a car snatcher and a traffic robber who uses fake pistol to rob unsuspected members of the public.

Bassey was arrested at about 06:00 hours around Lekki – Epe Expressway, Lagos, Southwest Nigeria, on Monday.

The suspect, who is a native of Akwa Ibom, was caught by the policemen who were on patrol after he had successfully dispossessed the owner of a Honda saloon car with registration number HB 96 AAA grey colour, of all his belongings including the sum of N8,000, while pointing an iron-made pistol on his forehead.

According to one of the officers, who craved anonymity, “we were on routine patrol duty when we suddenly saw a vehicle on high speed coming behind us. The said vehicle overtook us and its driver forcefully opened the door and started shouting for help.

“Immediately, we gave the car a hot chase which led to the arrest of a young guy, later identified as Paul Bassey, threatening to snuff life out of the driver if he stopped the vehicle.

“We had to radio other police officers around the axis to lay ambush ahead for the vehicle. But on getting to Lekki – Epe Expressway, other men have occupied the road and the suspected criminal had no choice than to surrender to the police. This was how we were able to intercept and arrest him.”

On arrival at the RRS Headquarters in Alausa, the suspect allegedly confessed to the crime, saying that he was not operating with any other gang in the area by snatching cars and robbing innocent members of the public with a toy gun.

“I was a lone operator in that area. I did employ the tactics of stopping private car drivers to seek for lift. Once I hop into the car, I will point the iron-made gun at their foreheads to subject them to my control. If they cooperate with me I will only collect their belongings and let them go. But if they drag with me, I will use my stainless toy gun to hit them. I did operate very early in the morning and late at night because they won’t know that I was using fake gun to threaten them,” he confessed.

Disclosing how he got the iron-made fake pistol, he said “I saw the stainless object which I used as gun at spray painter workshop along Ajah Road. I realised that I can be using the object which is originally meant to spray vehicle to rob unsuspected public early hours in the morning and late in the night because it really looks like a gun.”

The owner of the recovered vehicle, Mr. David Oriakhi, who also followed the suspect to the RRS Headquarters in Alausa, said he regretted offering a stranger a lift.

While explaining his ordeal to the police, the victim revealed, “I left my boss’ place around 05:00 a.m. hoping to get to my house before 7: 00 a.m. The suspect waved at me at VGC Roundabout. And, as a Good Samaritan, I decided to offer him a help. On getting inside the car, he pointed a gun at me asking me to hand over my belongings to him which I did. But to my greatest surprise, he asked me to turn back at VGC Roundabout and head towards Epe.

“At this point I got apprehensive but at the same time looking for necessary help that could come my way. When I turned towards Lekki-Epe Expressway, on getting to Ajah Roundabout, I sighted stationary RRS officers, then, I decided to ram my vehicle into them and shouted for help. This was how they chased us and the vehicle was intercepted and suspect arrested eventually.”

The victim said that the car was given to him as Christmas gift by his employer after 13 years of working for him.

“This car is a miracle vehicle for me. It was my boss who gave me as a gift for being committed and sincere with him,” he added.

The recovered vehicle, N8,000 and a mobile phone have been handed over back to the victim, while the suspect has been transferred to the Special Anti-Robbery Squad (SARS) for further investigations.

The Police Public Relations Officer (PPRO), Dolapo Badmos confirmed the arrest, adding that the police would continue to work round the clock to reduce crime in the state.