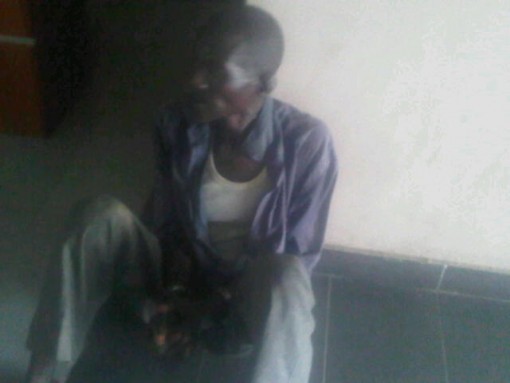 File Photo: Abdulahi Mohammed who allegedly raped a girl, 13, during his appearance in court

A 60-year-old man, Abdulahi Mohammed, has been arrested and charged before Ogba Magistrates’ court for allegedly engaging a 13-year-old girl in unlawful sex in Lagos State, western Nigeria.
Mohammed was arraigned on Thursday after which he was remanded in prison custody for the alleged offence.
The suspect allegedly lured the victim (name withheld) into his apartment in the evening and forcefully penetrated her.
P.M.NEWS gathered that due to the forceful penetration, the victim sustained injury in her private part and could not walk properly.
The incident happened at Bankole Agagu Street, Oke Aro, a boundary town between Lagos and Ogun states where both the suspect and the victim’s parents reside.
According to the police, Mohammed reportedly unlawfully had carnal knowledge of the victim through penetration between 2015 and 2016.
While the assault was going on, Mohammed warned the victim not to tell anyone.
However, the assault was exposed after the parents of the girl observed her awkward movement and asked her what happened to her.
She then revealed what happened to her and Mohammed was handed over to the police and he reportedly confessed and said the victim consented.
When Mohammed was arraigned, he pleaded not guilty on the two-count charge under the Criminal Code.
The presiding Magistrate, Mr T. A. Elias granted Mohammed bail in the sum of N3 million with two sureties in like sum.
The court ordered him to be remanded in prison custody at Kirikiri pending when he will perfect his bail.
The matter was adjourned till 11 April, 2016.