REVEALED: Tony Blair had an affair with Murdoch’s wife 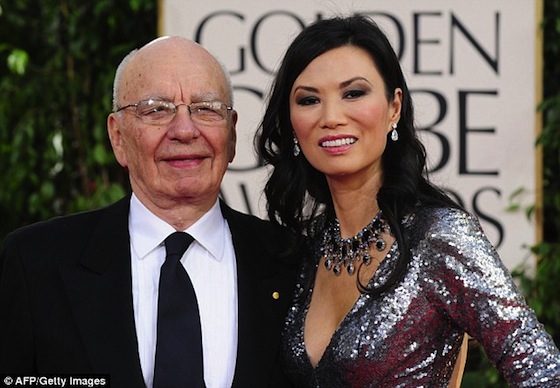 A new book, Tony Blair: The Tragedy of Power, has revealed the secret romance between former prime Minister of Britain and Chinese woman, Wendi Deng, the former wife of media mogul, Rupert Murdoch, leading to Murdoch divorcing the wife.

The sensational book, written by Tom Bower, an investigative writer also touches on Blair’s lies on the Iraqi war. It is published by Faber and Faber and will be released on Thursday.

“Though Blair spent most of his time jetting around Africa and the Middle East after leaving office, he made sure he kept up with Rupert Murdoch, the billionaire owner of the News Corporation media group.

In 2011, the two men met in America — not long after Murdoch took the decision to close the News of the World. Afterwards, Blair teamed up with the tycoon’s wife, Wendi Deng, to make business trips to her native China. His overtures to the Chinese — to become an adviser to one of the country’s sovereign wealth funds — fell on stony ground. But he grew close to Deng.

The following year, he visited the attractive 43-year-old twice at her husband’s London home. Then, that August, he was spotted alone with her at a Mayfair club.

Deng was clearly smitten. In an email to herself around that time, she wrote of Blair’s loyal aide, Catherine Rimmer: ‘Katherine [sic] Rimmer does not like me because she does not want Tony gets [sic] in trouble with me.’

Next, Blair few out to see Deng at Murdoch’s 1,000-acre home near Carmel in California.

She told her husband nothing about Blair’s visit; instead she said that she was staying at the ranch with a girlfriend.

In fact, her friend had already left when the former Prime Minister arrived, and Deng had also told some of her staff to make themselves scarce — while Blair’s protection officers were quartered in a nearby hotel.

On June 11, 2013, Murdoch and his wife hosted a dinner for a group of friends and visitors from London.

Unknown to his guests, and especially to his wife, he had already decided to file for a divorce the following day.

It was not a spur of the moment decision. Murdoch had been growing weary of his wife’s sharp tongue, her frequent absence at parties and on foreign trips, and the endless visits of her Chinese friends.

Her habit of speaking Chinese in his presence was particularly irksome. Their 14-year marriage, he decided, had run its course.

But there was another reason he’d had enough. While the Metropolitan Police were investigating phone-hacking practices at the News of the World, Murdoch’s team had sifted through millions of emails on his company computers.

During the course of this, emails from Deng were uncovered that suggested a close relationship with a tennis coach in Carmel, another with the founder of Google, Eric Schmidt — and a third with Tony Blair. It was left to one of Murdoch’s sons to show the messages to the ageing tycoon.

They made for unedifying reading. In one memo to herself, Deng had written: ‘Oh s***, oh s***. Whatever why I’m so so missing Tony. Because he is so charming and his clothes are so good.

Other messages suggested that Blair had met Deng in New York, London and Beijing.

According to Murdoch, he then quizzed his servants in Carmel and learned that Blair had stayed overnight on April 27, 2013. Yet Blair had met him the following day in Los Angeles — to ask for money for his Faith Foundation — and hadn’t mentioned staying at the ranch or seeing Deng.

Murdoch’s staff told him the rest: during their meals, the couple had been seen feeding each other, and Blair had also been spotted joining Deng in her bedroom and closing the door.

Hours after the divorce was announced, Blair telephoned Murdoch, insisting he was innocent. But, after a brief conversation, the tycoon refused to take any more of his calls.

Blair nevertheless spoke regularly with Deng on the phone. With Cherie’s support, both he and Deng publicly denied there had ever been an affair. No one could definitively prove that there had — but Murdoch ridiculed Blair’s denials. And there can be no doubt that the former PM was damaged by global interest in the scandal.

For six years, he had cultivated an image as a respected globe-trotting statesman, but this business with Deng shocked some of his associates. Particularly appalled was an American billionaire, Tim Collins, who was not only on the board of Blair’s Faith Foundation but had also given it considerable sums of money.

‘The Wendi Murdoch affair put me off,’ he recalled. ‘The real man was revealed. He’s incapable of self-criticism. I felt so naïve.’

Collins duly withdrew his support from the Foundation. The row also fuelled the end of Blair’s role as Middle East peace envoy.