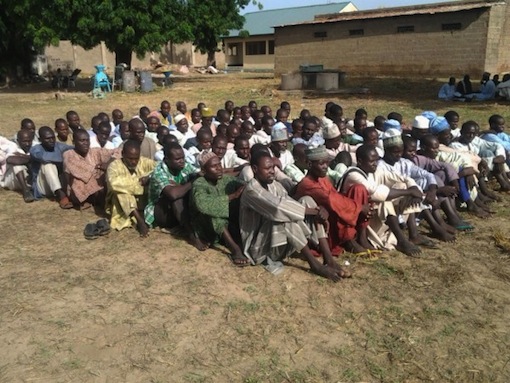 Food embargo as a lethal weapon of war, is working in Nigeria’s north east, where hungry militants are fast losing the appetite to continue their war of attrition against Nigeria.

Scores of emaciated-looking Boko Haram members begging for food have surrendered in northeast Nigeria, the military and a civilian self-defense fighter said Wednesday.

Seventy-six people including children and women gave themselves up to soldiers last Saturday in Gwoza, about 100 kilometers (60 miles) southeast of Maiduguri, according to a senior officer.

All are being detained at military headquarters in Maiduguri, the birthplace of Boko Haram and currently the command center of the war against the Islamic extremists, according to the officer. He insisted on anonymity because he is not authorized to speak to journalists.

The detainees said many more fighters want to surrender, a self-defense civilian fighter who helped escort them to Maiduguri revealed today.

Food shortages could indicate that Nigeria’s military is succeeding in choking supply routes of the Islamic extremists who have taken their fight across Nigeria’s borders. Some 20,000 people have died in the 6-year-old uprising. Boko Haram was declared the deadliest of all terror groups in 2014, surpassing the Islamic State group to which it declared allegiance last year.

Nigeria’s military reported that dozens of Boko Haram fighters were surrendering in September and October last year. It promised those who give themselves up voluntarily that they will be rehabilitated through a de-radicalization program.

In the 10 months since he took office promising to halt the insurgency, President Muhammadu Buhari has replaced the leadership of the military, moved the headquarters for the fight from the distant capital, Abuja, to the heart of the northeastern insurgency and resupplied soldiers.

The military has driven the insurgents from the towns and villages where they had set up an Islamic caliphate but Boko Haram has returned to hit-and-run tactics and suicide bombings.