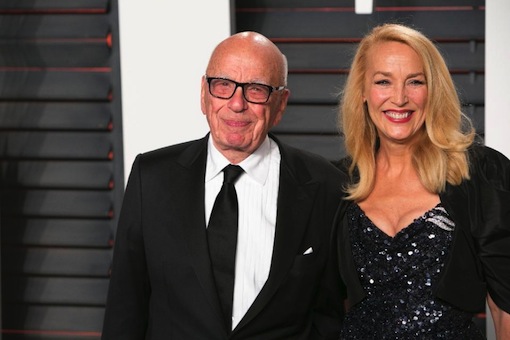 Media mogul Rupert Murdoch married model Jerry Hall in London Friday after the couple announced their engagement in January, a spokesman for the family confirmed.

The couple tied the knot at Spencer House, a mansion in central London. They are expected to hold another ceremony at a church in the city Saturday.

Murdoch, 84, wore a blue suit while Hall, 59, wore a pale trenchcoat as the couple smiled for photographers following the ceremony.

It is Murdoch’s fourth marriage and the first for 59-year-old Hall, an American. although she had a long-term relationship and four children with Rolling Stones frontman Mick Jagger.

With an estimated fortune of more than $11 billion, Murdoch owns some of the world’s most famous newspaper titles, including The Wall Street Journal, The New York Post and British tabloid The Sun.