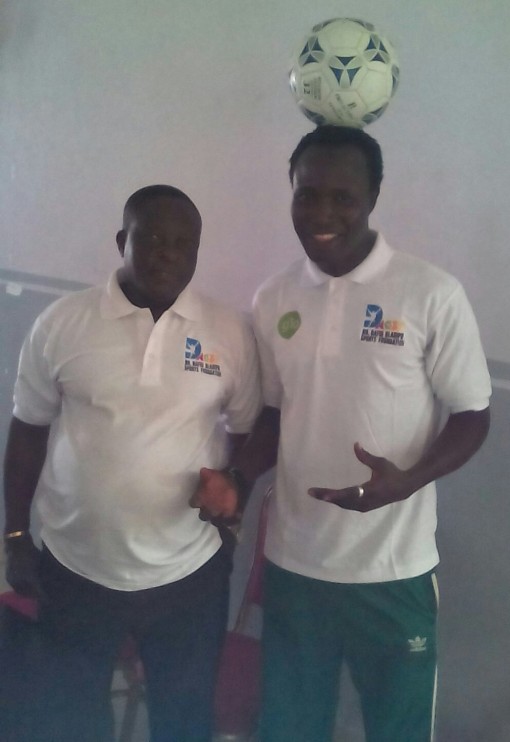 Harrison Chinedu, who walked the distance of 48.04km with a ball on his head last Sunday in Lagos, says juggling with ball has been a passion for him since childhood.

Chinedu, with this feat, wrote his name and that of Nigeria in the Guinness Book of World Records as the man with the farthest distance who travelled with football balance.

“With ball on my head I can conveniently do anything and the ball will not fall down,” said Chinedu, who started his football career with Bursdor of Port Harcourt before travelling to Cambodia for greener pastures in the round leather game.

“My biggest motivation was that I believe in showcasing my God-given talent. I know I have the skill and I want to show the world what I can do.

“I thank the Rafiu Oladipo Sports Foundation for encouraging me both financially and otherwise and also made contacts with the Guinness Book of World Records office to ensure the event took place.”

Dr. Ladipo whose Ladipo Sports Foundation sponsored Chinedu to achieve the feat, said “it’s not easy putting our money on him, but having seen Chinedu walk from the Redemption Camp to the National Stadium twice before he now did the official walking on Sunday, we believed that he is the right man.

“We approached the officials of the Guinness Book of World Records who gave their approval and the conditions that must be met before, during and after the exercise. I’m happy to say that we met all these conditions.

“We had on ground three FIFA badged referees led by the President of Nigerian Football Referees Association to monitor Chinedu during the walk, officials of Nigeria Institute of Sports, NIS, with many journalists also present. Dr. Demola Are represented the Sports Minister, Solomon Dalung. Chinedu was followed from the starting point to the end. A Nigerian licenced surveyor authenticated the distance covered by Chinedu.

“What surprised everybody was that after walking the distance from the Redemption Camp, passing through heavy traffic along the expressway and reached the stadium, the boy did another 17 inside the mainbowl of the stadium. He thereafter had his bath and put on his clothes with the ball on his head. This was awesome.”

The President General of Nigerian Football Supporters Club said the next thing on the card for Chinedu now is that the foundation is ready to support him.

“There have been some enquiries from some companies coming with proposals to endorse Chinedu as their ambassador. I believe very soon, this guy will go places. On our own part, we are going to sponsor him to Tafisa 2016 championship,” Ladipo said.