Osimhen arrives U-23 camp, vows to fight for shirt 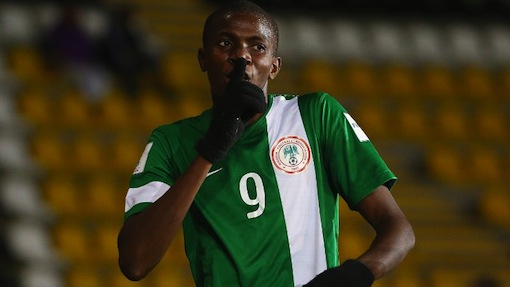 FIFA U-17 World Cup highest goal scorer ever, Victor Osimhen, has arrived the camp of the U-23 national team, Dream Team, ahead of the international friendly game against Brazil later this month.

The gangling striker who arrived the Star View Palace Hotel camp of the Dream Team at about 1pm on Sunday was received by interim Head Coach, Fatai Amao.

Speaking on arrival, Osimhen, who was part of the Africa U-23 Cup of Nations –winning team to Senegal last year, said: “It’s always fun for me to come to camp and play for my fatherland. I see it as a privilege and will always honour such invitations any time I am called upon.

“I have come to fight for a jersey in this friendly match that is part of preparations for the Rio Olympics and I am happy to be among the invited players. You know I was part of the Golden Eaglets team that defeated the Brazilians at the last U-17 World Cup in Chile and so it will be a pleasure for me to play them at their backyard and hopefully find the back of the net, as I did against them in Chile.”

With his arrival, Osimhen became the first foreign-based player to arrive camp in preparation for the game.

The U-23 are expected to depart the shores of the country on Sunday, 20 March, aboard a South African Airways flight.