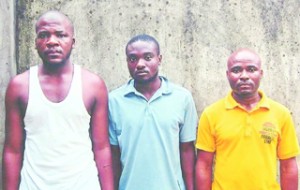 Hassana, wife of former Speaker of Edo State House of Assembly, Zakawani Garuba, was freed alongside three others, including two medical doctors who were randomly taken from a commuter bus the same day she was sized.

The Magistrate and the two doctors were abducted along the Benin-Auchi road after the kidnappers shot her police orderly simply identified as Marcus, while the fourth victim was a farmer who ran into the kidnappers in the forest and was tied to a tree.

A source lose to the Magistrate who did not want to be named, confirmed that kidnappers freed their victims near Egba village along the Adumagba-Akure express road, after collecting ransom.

The source said the victims were asked to walk through a particular route inside the forest by the kidnappers until they got to the road from where they took motorcycle rides to Egba junction along the Benin-Auchi road.

The Magistrate was received in good condition by her family members at about 4 p.m. on Saturday.

A relative of the Magistrate said the kidnappers made their victims trek through the forest and only rested for a few hours before they released their victims.

When contacted on phone, Edo Police Command Spokesman, DSP Abiodun Osifo, who confirmed the release of the kidnap victims, said “all our efforts paid off.”