Ambode returns to school for anniversary 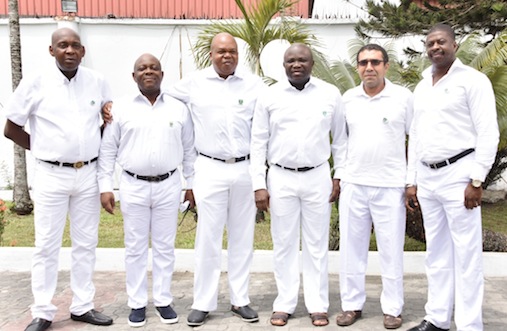 L-R: Lagos State Governor, Mr. Akinwunmi Ambode (3rd right), Country Senior Partner, Nigeria & Regional West, Pricewater HouseCoopers, Mr. Uyi Akpata(3rd left) and some of the old students of Federal Government College, Warri, during one of the programmes lined up for the 50th Anniversary of the School, on Saturday, February 27, 2016


Saint Jude’s Primary School, Ebute-Metta, Lagos, southwest Nigeria, is celebrating its 132nd anniversary 20 March, 2016, and will host the Governor of Lagos State, Akinwumi Ambode and other dignitaries who are alumni of the school.
Other dignitaries expected at the anniversary celebrations are His Excellency, Vice President of Nigeria, Prof.Yemi Osibanjo; Senator Bola Ahmed Tinubu (The Jagaban of Borgu); HRH Oba Rilwan Akinolu, Otunba Chief Henry Oladele Ajomale, General Ike Nwachukwu, Hon. Justice Ajose Adeogun, Sir Abiodun Akinyemi, Mrs Olabisi Osinbajo, Most Revd A. D. Akande and Chief Kemi Nelson.
President General of Saint Jude’s Primary School, Ebute-Metta, Old Students Association, Moses Kunle Akinsehinwa, explained that the Founder’s Day is used for maintaining the values on which the school stands.
“Saint Jude’s Founder’s Day is a day set aside to retain the values on which the school stands. For us, after so many years, a day like this is usually set aside to look into the philosophy backing the school.
“Reminiscing on the school, I would say that this year we are 132 years old, from all indications we are not so young or so old. We are at the forefront of providing quality education, which has been the selling preposition of the school,” Akinsehinwa said.
Tags:   Akiolu   Ambode   anniversary   Osinbajo   School   Tinubu