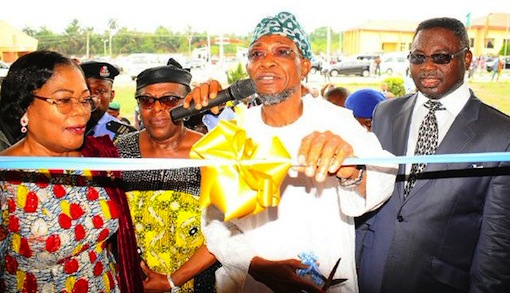 Governor of Osun, Ogbeni Rauf Aregbesola on Thursday commissioned Kings University in Ode-Omu, Osun state, reiterating that, the goal of his administration’s education reform is to develop the ‘new man’ in students that are intellectually, socially and morally sound for the growth of the state.

Also at the commissioning of the university is the proprietor and chancellor of the institution, Pastor Mathew Ashimolowo.

At the commissioning, Aregbesola announced that the Gbogan-Ode-omu road will be completed by the end of this year, promising that, by the next 180 days, the road will be a reference point in road construction in the country.

Speaking at the function, he stressed that such students groomed from schools in Osun will be a non-parasitic and non-oppressive man who views his existence in light of the growth of others, saying such creation will see whatever he acquires as what should be used in the overall interest of others.

The governor noted that the Omoluabi essence should be the goal of all education endeavour and that all higher school graduates must be worthy in learning and character thus contributing to the growth of the country.

‎”It is hoped that this university will be able to provide moral instructions to their students by ministering to their souls. Indeed, a graduate worthy in learning and character is an invaluable addition to the nation’s social capital.

“A well-educated citizen who is morally upright cannot be quantified. This is also the philosophical underpinning of the reforms we have carried out in education in the state of Osun. Our goal is to develop the new man intellectually, socially and morally.

“This new man is placed in the centre of society who views his own development as part of and for the development of society. This is a non-parasitic and non-oppressive man who views his existence in light of the growth of others; he views whatever he acquired to be subsumed in the overall interest of other”. The Governor pointed out.

Aregbesola who chided how most universities are all striving to be generalists, held that each university, especially private ought to carve a niche for itself in area of relevance that reflects national or human need.

He charged Kings University to resist the temptation of being a generalist but rather concentrate on an area of need and become a specialist in it.

“Every must equip every one of its graduate with a specific life-sustaining skill. Every graduate must be in a position to survive on his or her own, without necessarily looking for non-existent jobs.

“This is the challenge of the university in the 21st Century, and not seeking knowledge for knowledge sake as in the days of Aristotle,” he emphasised.

The governor noted that the coming of private universities was at a period when there had been noticeable decline in university education, adding that, the existing universities were plagued by poor quality graduate turnout occasioned by the proliferation of murderous gangsters, prostitution, examination racketeering among other vices.

He stressed that the coming of private universities gave hope for those who could not afford to send their children to universities abroad, advising that Kings university should be able to provide moral instructions to their students by ministering to their souls.

‎Earlier, the Proprietor and Chancellor of Kings University, Pastor Mathew Ashimolowo stated that the University is established to complement other universities to absorb numerous applicants who could not be admitted because of limited spaces in the existing universities.

He stated that the university is established to raise leaders, kings, entrepreneurs and men whose minds are transformed and who will transform not only this community, state, Nigeria and the African continent.

Ashimolowo noted that the primary vision of establishment of the university is therefore to raise leaders with quality and outstanding character.

The Chancellor averred that the institution has come to change the mindset of the people from thinking locally to thinking globally.

He said: “Our vision for this university is to raise leaders with quality leadership. We want to raise leaders and kings whose minds are transformed; men who are going to be quoted; make our young people think bigger than their immediate surroundings.

“We want to transform one mind at a time; men who will stop thinking local but global; men who will not only change our community but also our state, country and the African continent.

“We’ve raise generation of graduates who are job seekers. Now, Kings University will raise graduates equipped with entrepreneurial skills so as for them to be job creators.”

The founder also disclosed that all the pioneer students of the universities were admitted on full scholarship.