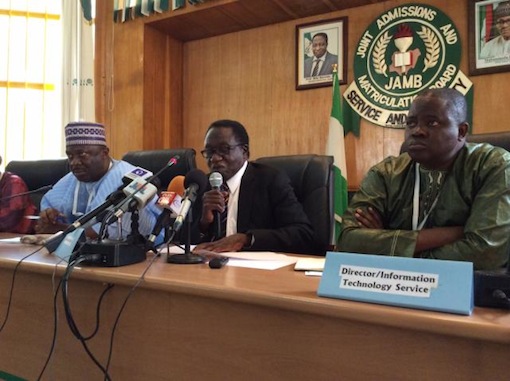 The Joint Admissions and Matriculation Board (JAMB) on Friday warned against returning to the Paper Pencil Test, saying it would amount to “taking Nigeria one step forward and ten steps backward for Nigeria.”

The Registrar/Chief Executive of JAMB, Prof. Dibu Ojerinde, who sounded the warning during a press briefing, said despite some challenges, the Computer-Based Test, has done a lot in reducing examination malpractices.

He said, “Members of the House of Representatives are lawmakers. They have every right to debate the CBT, If the government says we should go back to the old system, we will comply. But it won’t be good for us, we know those who have been been benefiting.

According to him, JAMB would reschedule examination for candidates who missed the Unified Tertiary Matriculation Examination (UTME) because of relocation of centres, adding that, it had relocated 59, 000 candidates in 15 states because of challenges in some of the centres.

“We relocated candidates where the board had challenges. The board is looking at some of the issues raised during the examination but most of the excuses raised by candidates are flimsy,” he said.

“We relocated about 59, 000 candidates due to the problems in various centres which vary from town to town. There are about 59,000 of them spread across 15 states of the federation.

“Those that were relocated never suffered any setback or inconvenience. For all these two set of people I want to apologise sincerely for what happened to them but we are going to put on a redress for those whose relocation affected them in missing their examination.

“Let me use this opportunity to offer explanation on the issue of the much publicized two results. The process of our marking involves transformation and other qualitative programming. In the process of these configurations we had a little challenge which we quickly corrected and ensured that this never happened in subsequent results. This challenge was only associated with the candidates that sat for this examination on Saturday 27th, and some candidates of Monday, 29th February, 2016.”

Prof. Ojerinde, said that the board found out that some of the over 500 centres used for the CBT was compromised by the operators.

He said that one of its centres in Uromi, Edo State was invaded by mercenaries during the examination.

He blamed the education consultants for mobilizing candidates to protest against the conduct of the examination by the board, adding that the quality of the centres used for UTME would not be compromised.

“In our quest to have adequate and effective centres for the exercise, we approved over 500 centres but unfortunately, some of the centre operators were not sincere in proving us with the true position of their facilities.

“They hired equipment during the period of accreditation and other necessary apparatus and on the examination day they were found wanting. This led to relocation or rescheduling of candidates from some of them to more suitable centres.

He said that Nigeria was ready to take the CBT examination, adding that reverting to the PPT as directed by the House of Representatives would amount to lack of progress.