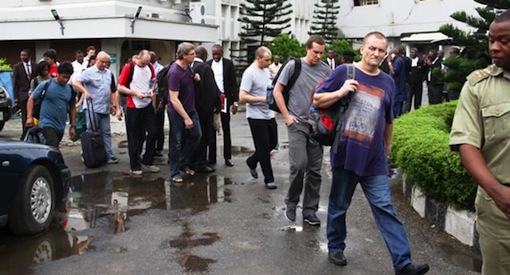 The 14 foreigners arrested in March 2015

Three Russians convicted in absentia for illicit oil deal by a Federal High Court sitting in Lagos have been declared wanted and an international warrant of arrest issued by the Nigerian authorities.

The three convicts Pakhladzhian Artur, Kretov Andrey and Shkundich Vasily reportedly jumped bail and were absent at the sentencing today, in which 11 other accomplices were given a more liberal two year term and an option of N2million fine.

Justice Buba Ibrahim said the Russians would commence their five year jail term on whatever day they were re-arrested. They were not given an option of fine.

All the other convicts were foreigners from Ukraine, Philippine and Japan.

They were all found to be illegally dealing in petroleum products in Nigeria without lawful authority.

The court found them guilty of dealing in 1,738.087 metric tons of petroleum product in Nigeria without lawful authority or licence as alleged by the Economic and Financial Crimes Commission, EFCC.

Justice Buba sentenced eleven out of the fourteen 14 convicted foreigners to two years imprisonment each on each five count charge with an option to a pay a fine of N2m each.

Justice Buba said the sentence would run concurrently from 8th of March last year when they were apprehended by the Nigerian Navy and handed over to the EFCC.

He ordered the forfeiture of the petroleum products and the vessel into which they were loaded to the Federal Government.

He also ordered the two companies convicted alongside with the foreigners to pay N5m fine on each of the five counts levelled against them.

The EFCC had on June 10, 2015 arraigned the fourteen convicts on four counts alongside their vessel – MT Anukt Emerald, and two companies – Monjasa DMCC, and Glencore Energy UK Ltd.

The EFCC prosecutor, Mr. Rotimi Oyedepo, told the court that the men were handed over to the EFCC by the Nigerian Navy which on February 27, 2015 intercepted them with their vessel, MT Anukpet Emerald, loaded with crude oil estimated at 1,738.087 metric tons.

The foreigners were equally said to have been found in unlawful possession of 1,500 metric tons of Automated Gas Oil as well as 3,035 metric tons of Low Pour Fuel Oil.

They all pleaded not guilty and were granted bail in the sum of N50million each, which was guaranteed by Zenith Bank Plc.

However upon the disappearance of the three Russians, the court subsequently ordered Zenith Bank to forfeit N150 million bond used to secure their bail to the Federal Government.

To prove the allegations against the convicts, Oyedepo called seven witnesses, while the defendants, through their lawyer, Mr. Babajide Koku (SAN), called three witnesses.

In his judgment today, Justice Buba said he was satisfied that the prosecution proved its case against the defendants beyond reasonable doubts, therefore had no difficulty in convicting them on all the five counts preferred against them.

Upon their conviction, the defence counsel, Koku, urged the court to temper justice with mercy, saying the convicts were young men in their prime, who had no previous records of conviction.

Koku said the 11 convicts who were in court were only employees carrying out the instruction of their employer and were not privy to the deal.

“We plead for mercy, My Lord. Abraham Lincoln said, ‘I have always found that mercy bears richer fruits than strict justice.’ The convicts are young men in the prime of their lives. They have no family ties in Nigeria,” Koku said.

On his own part, Oyedepo said the EFCC had found no previous conviction record on the convicts.