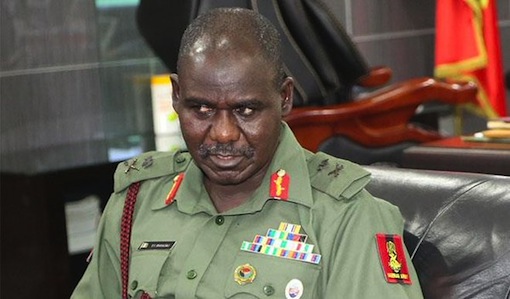 The Chief of Army Staff, Lt.-Gen. Tukur Buratai, says the Army will adjust deployment of troops as part of measures to end the killings in Agatu communities in Benue.

Buratai, who said this during his visit to a military tactical operational base, near Otukpo in Benue, expressed confidence that the mayhem would be contained.

According to him, all logistics and other requirements have been provided for the operation. “The crisis here is unfortunate, the farmers and herdsmen fighting must not be condoned. I have heard from the commander about the existence of criminal elements who engage in cattle rustling.

“We have observed the deployment of troops on ground, we are adjusting our troops deployment to take care of the flashpoints and likely areas where the criminals are hiding,” he said.

Buratai said measures had been adopted to ensure that the clashes did not repeat and the people return to their settlements.

He, however, noted that the troops were cooperating with other security agencies to restore peace and order in the area.

NAN reports that the Army chief met with operation commanders on measures adopted to contain the crisis in the area.

NAN recalls that clashes between herdsmen and farmers in Agatu and environs had claimed many lives and displaced many families.