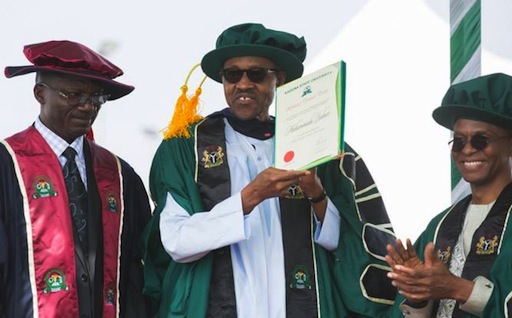 Buhari made the disclosure in Sokoto on Saturday in a message to the Joint 32nd, 33rd and 34th Convocation and 40th Anniversary of the Usmanu Danfodiyo University, Sokoto.

The President, who was represented by the Executive Secretary, National Universities Commission (NUC), Prof. Julius Okojie, said that the fund was set up to assist the various universities to undertake meaningful researches.

Buhari explained that such researches were aimed at solving the myriad of problems facing Nigeria currently.

The President specifically charged the nation’s universities to undertake researches in solar and other renewable energy sources.

“The universities should embrace education to solve the challenges facing the nation now.

“Universities should also be vanguards in the diversification of the nation’s revenue sources in view of the falling prices of crude oil in the world market.

“Universities should also rack their brains and come up with alternative sources of sustaining the nation’s economy,’’ Buhari said.

He further expressed the commitment of the Federal Government to continue to be alive to its responsibilities to the education sector.

The president explained that this commitment led to the increase in the budgetary allocation to the sector in 2016.

He also promised that universities would continue to be assisted to function effectively.

The president urged the Organised Private Sector and other stakeholders to complement the efforts of the government in funding education at all levels.

The Chancellor of the University and Oba of Lagos, Oba Rilwanu Akiolu, solicited support of President Buhari in ensuring the success of the ongoing war against corruption.

Akiolu, who was installed as Chancellor of the university at the event, further said, “Buhari is a focussed, patriotic, pious and committed leader who needs the support of all Nigerians”.

The University’s Pro-Chancellor and Chairman of Council, Dr George Egabor, said that although subventions to the institution had improved, they were largely inadequate.

“As such, we cannot maintain our infrastructure, provide essential services , as well as other services required for the university’s development,” Egabor said.

They were: the Sultan of Sokoto, Alhaji Sa’ad Abubakar III, Oba of Lagos and Chancellor of the university, Oba Rilwanu Akiolu and former Lagos State Governor, Sen. Bola Tinubu.

Tinubu, who responded on behalf of the receipients commended the University for bestowing the honour on them.

The former governor promised that the honour would spur them to do more to sustain peace and unity of Nigeria, as well as national development.

He said that Nigeria was on the brink in 2015 but the APC brought the desired change to the nation.

Tinubu urged Nigerians to be patient and fervently prayerful.

NAN reports that the ceremony was attended by the Governors of Lagos, Sokoto, Katsina, Kebbi and Zamfara and Sokoto Deputy Governor, Alhaji Ahmed Aliyu.

It was also attended by various Obas, Emirs, National and State Assemblies’ members and other dignitaries across Nigeria.