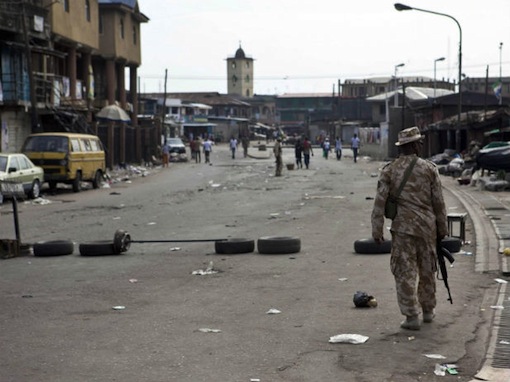 The parliamentary re-run election on Saturday in Rivers was characterised by low turnout of voters, especially in Port Harcourt and environs.

NAN reports that the situation was due to screening which the voters were being subjected to various security check points around the city.

At the check points the a voter is expected to raise his or her hands while approaching as sign that he or she is no carrying any dangerous item.

Some of the voters who were seen returning to their homes told NAN they were not prepared to go through the rigours of raising their hands and being frisked “just because we came out to vote”.

They said that it was their right to vote but not under such stringent condition.

“I wanted to go and vote out of my own will but I will not allow myself to be subjected to raising hands,” one of the voters, who declined introduction, said.

The development was critical at the polling units in Ward 2, Rumudara in Obio/Akpor Local Government Area where the voters were discouraged by the security post at Artillery junction, Aba Road.

However, polling which commenced in most areas more than two hours later than scheduled time of 8 a.m. due to late arrival of electoral officials and materials, was still ongoing.

The exercise is peaceful as there is adequate presence of security personnel, and card readers deployed at the centres were functioning properly.

A voter in Ward 8, Mr Chuks Obi, told NAN commended the security arrangement for the election, saying that he was encouraged to come out and vote by the “tight security.”

According to him, in spite anticipated violence, the security presence in the state gave me the courage to come out to exercise my voting right.

Obi said that although the local government area had no history of violence, “I heard that 6, 000 policemen were deployed to the state to provide security for the election”.

He said that such number of security personnel was not needed for election in an ideal society, and urged politicians to stop being desperate about elections.