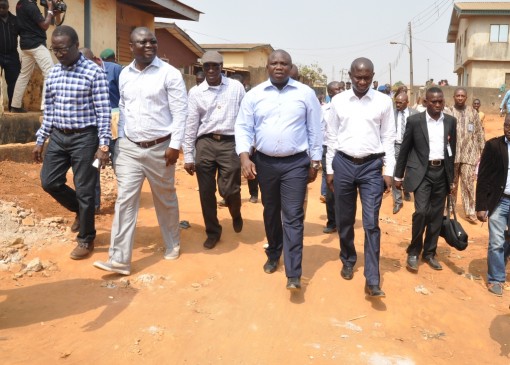 The Lagos State Government has commenced road reconstruction in Gowon Estate, a Federal Housing Estate built about 40 years ago in Egbeda, Ipaja area of the state.

The residents say it is the first of its kind as successive governments in the state had not remembered that some tax payers live there.

NAN reports that the rehabilitation, which started early this month, is being carried out through the Alimosho Local Government/Mosan Okunola Local Government Council Development Areas.

A Correspondent of the NAN reports that the work which has a 16-week completion schedule, is being carried out on one of the estate’s major access roads, 41 Road.

NAN reports that the kerbs, this is, the concrete pavement and the coal tar have been excavated.

The Chairman, Community Development Association (CDA) of the Estate, Mr Nathaniel Okoro, told NAN that the residents were happy that for first time, the state government remembered those who pay taxes into its coffers.

An apparently joyful Okoro expressed the hope that it was the beginning of the good things to come to the estate from the government after about 40 years it was constructed.

“We want to believe this is the beginning of good things to come because there are so many other roads that are bad in this estate.

“While we express our joy for the reconstruction of 41 Road, we pray that other roads will receive due attention. These are 4th and 5th Avenues, 3rd, 411, 401 and 1st Avenue,” Okoro said.

The CDA chairman noted that the community was not informed of the specification or scope of the work to be done by the contractors, Wetland Construction Nigeria Ltd.

“This will make it difficult for the community to check whether the work is according to specification or not.

“Secondly, we don’t know if there will be walkways, because if there will be, the contractors will need the community’s co-operation to inform those who had built shops around the road to shift backwards.

“They could also be asked to remove them from the sides of the road so that they will do their work.

A top official at the Engineering Department of the Council, who preferred anonymity, told NAN that the drainage ‎systems in the area were already being worked on.

The official said the drainage system in the estate was underground and that was why the ongoing work was not noticeable.

According to the official, the drainage must first be cleared before the actual reconstruction can commence.

The official decried the extent to which the drainage system was ‎blocked with disused tyres and other non-biodegradable refuse by the residents.

“It is so bad and unfortunate for some residents to turn the drainage system into refuse dump; our men have been working underground for some weeks clearing the refuse.

“If the refuse is not cleared and the drainage system properly ‎opened, the reconstruction cannot commence.

“The recent rainfall testifies to the fact that the drainage has been worked ‎on as there was no flood in the area, unlike when the drainage was blocked,” the official said.

He also said ‎that the laying of concrete kerbs to divide the road verges and create walkways was also ongoing.

“Our men have also started scrapping the bad portions of the ‎road because we are embarking on construction of new roads and not repair.

“The existing drainage system will be repaired and maintained,” the official said.

According to him, the council was constructing only the 41 Road in the estate ‎and Street lights will be provided at the end of the construction.

“It is important to note that Gowon Estate is ‎Federal Government-owned but the state government in collaboration with the local government has been magnanimous to repair a portion of it.”

The official said the decision to repair only 41 Road was in line with the state government’s directive that the local government councils choose two roads within their jurisdiction for reconstruction.

“The council chose Remi Ogunjimi at Okunola and 41 Road in Gowon Estate; others may be done later.

“Work at Remi Ogunjimi seems fast because there are no underground drainages ‎being worked on, but the repair of the drainage system in Gowon Estate makes the work seemingly slow.

“But it is not in actual sense, a lot of work is ongoing,” the official said.

According to the official, the council is working assiduously with the site engineers to ensure that the reconstruction is completed within the 16 weeks stipulated on the project’s bill board.