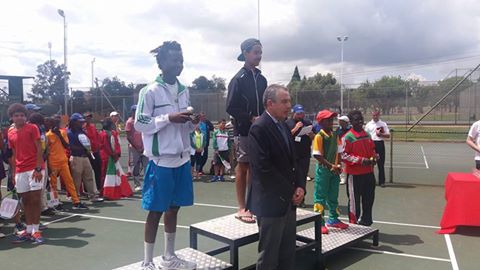 Osewa at the presentation ceremony on Friday


The impressive performance of Team Nigeria at the 39th ITF/CAT African Junior Championship concluded over the weekend in Pretoria, South Africa has been rewarded with a ticket for the Junior Davis Cup scheduled for Egypt later this year.

Also, Michael Osewa emerged silver medalist in the boy’s 14 & under category of the 11-day tournament following a 7-5, 6-4 loss to Damien Laporte of the Seychelles.

Osewa went into the match as the favourite having triumphed 3-6, 7-5, 6-4 in the most recent meetings between the two players which was at the Top 8 African Junior Masters held in Casablanca, Morocco last November but it was his opponent from the Indian Ocean Island that carried the day.

Osewa had made it a trademark of recovering after losing the opening set –a feat he achieved against top seed Younes Adnane of Morocco in the last-16, Jason Espitalier of Mauritius in the quarterfinal and Ryan Randiek of Kenya in the semifinal, but it was not to be this time as Laporte broke him in the ninth game of the second set before taking his remaining two games on his own serves.

He said: “The fear of the North Africans is now a thing of the past for us. Our immediate task is to complement our performance here which is the best in Nigeria’s history with a bigger support for our junior players especially now that we are back in the Davis Cup after failing in the last three years.”

Yousef Khamis claimed the Boys’ 16 & under singles title after beating Philip Henning of South Africa 7-6, 6-2, but Makayla Loubser restored the pride of the host nation by winning the Girls’ 14 & under title with a 7-5, 6-3 win over Aisha Niyonkuru of Burundi.

ITF Moroccan Centre player Sada Nahimana of Burundi, made history as she claimed her third ITF title in succession at the expense of Morocco’s Diae El Jardi 7-5, 6-2.

Friday Gabriel, Christopher Itodo, Christopher Bulus, Barakat Quadri, Marylove Edward, Angel McLeod and Adetayo Adetunji are the other players that featured for Nigeria at the 11-day championship which attracted at least 120 players from 25 countries.