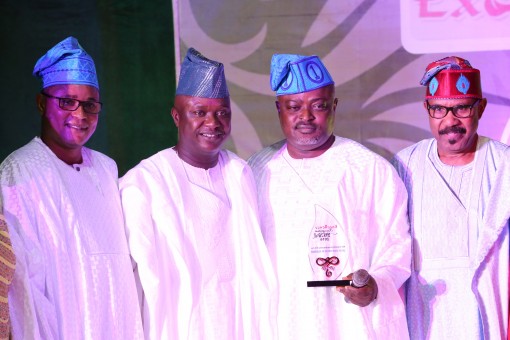 Speaker, Lagos State House of Assembly, Rt. Hon. Mudashiru Obasa (3rd right) holding the award plaque for the Most Outstanding House of Assembly. He is flanked by his Deputy, Hon. Wasiu Sanni-Eshinlokun (left); Senator Babajide Omowarare (2nd left) and Dr. Olorunimbe Mamora during the Award of Excellence organized by Global Excellence Magazine on Sunday in Lagos

The Lagos State House of Assembly has commenced an enlightenment campaign for Nigerians to commence patronising made-in-Nigeria goods, arguing that, this is for the benefit of the citizens and to strengthen the economy.

The lawmakers further tasked the state and federal Ministry of Information to join in the enlightenment campaign and urged the Federal Government to ensure steady power supply as this would cater for much of the challenges facing the economy.

They argued that belief and patronage of made-in-Nigeria goods would help scale down the over-dependence on dollars and the devaluation of the naira which the country is struggling to reverse.

The lawmakers pleaded with the Central Bank of Nigeria, CBN, to stem the demand for dollars by Nigerians so that naira could regain its lost value in the international market.

In a motion sponsored by some lawmakers including Moshood Oshun, Rotimi Olowo, Gbolahan Yishawu and others, they argued that the devaluation of the naira was as a result of the fact that Nigeria had become too import-dependent.

Olowo, the lead sponsor, said: “we want the President of Nigeria to direct the Minister of Power to ensure regular supply of power in the country and to direct the Governor of the CBN to stop the demands for dollars in the country and the Minister of Information should embark on campaign for Nigerians to patronise locally produced goods,” he said.

Olowo stressed that Nigeria is a consuming nation and keeps importing, while the country is being exposed to external manipulations.

He urged the Bank Of Industries (BOI) and other specialised banks to assist local companies so that they could produce locally and that Nigerians should reduce their demands for foreign goods.

In his contribution, Oshun said even though this country is free, its citizens indirectly beg to be enslaved because of what they have turned the country’s economy into.

Oshun lamented that Nigerians travel abroad for medical treatment, send their children to school abroad and even pay rents in dollars in places like Ikoyi area of Lagos.

“This is why to get visa these days, Nigerians would go spiritual praying and even visiting native doctors,” he said adding that because of taste and the zeal to “belong”, Nigerians believe that anything produced locally is fake.

“Most of the high-rise buildings in Ikoyi and the Island are rented out in dollars in a country where the official currency is naira,” Oshun lamented adding that Nigerians must collectively change their ways.

In his contribution, Gbolahan Yishawu expressed concern that Nigerians were dollarising the economy, and that electricity is a factor in the whole process of revamping the economy.

He suggested that the CBN should use its regulatory tools to bring interest rate to a single digit.

Supporting him, Yinka Ogundimu stated that the state of the economy calls for concern and that talking of patronising made-in-Nigeria goods is “easier said than done” adding that Nigeria operates a monolithic economy unlike in the past when it depended on agriculture.

“Our banks are no longer into banking, they only run after ready-made activities and not productivity. We need electricity and conducive atmosphere in the country,” he said.

Dayo Saka-Fafunmi emphasised that the country’s monetary and fiscal policies should be reviewed and that monetary policy is a function of the CBN.

Abiodun Tobun, in his own contribution, said that Nigerian leaders should be determined to patronise made-in-Nigeria good and that the people should encourage the development of cottage industries in the country.

The Majority Leader of the House, Sanai Agunbiade, revealed that the solution is in increasing the nation’s productivity.

He expressed concern that a lot of companies relocated from Nigeria due to epileptic power supply and that the nation’s economy would be restored if there is 24-hour power supply.

Hon. Olumuyiwa Jimoh however said poor power is just one of the problems, but that it is more of a social problem and lack of confidence in the government.

The Speaker of the House, Mudashiru Obasa, emphasised that Nigeria has a lot on its hands and that the Federal Government should amend the nation’s constitution so that each state would be allowed to generate electricity and distribute such to the people.

“The Federal Government should be concerned about policies that would make all sectors meaningful. They should put necessary infrastructures in place and ensure safety of lives and properties.

“Our people should patronise Made in Nigeria goods and we should not allow dollars as means of exchange in the country. We have to change our attitude and ways so that we could develop our economy,” he said.

The Speaker also advised that the government should provide qualitative education and medical facilities, adding that patronising made-in-Nigeria goods would lead to more jobs for the people.