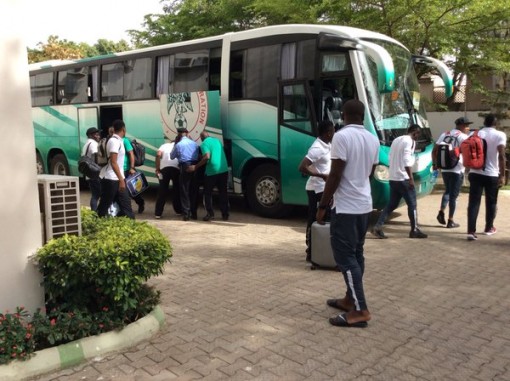 Super Eagles arriving Kaduna ahead of the match against Egypt

Media Officer of the Super Eagles, Toyin Ibitoye, has said that Nigeria will unleash the two Moses in the senior national team on the Pharaohs of Egypt when both clash in the double-header Africa Cup of Nations qualifying matches.

Nigeria will play host to the Egyptians on Friday, 25 March in Kaduna, while they will be the guests of the Pharaohs in Akexandria four days later for the second leg of the crucial qualifiers which determine the two countries’ fate on the road to 2017 Gabon AFCON.

Interestingly, the Eagles are having two Moses in the camp, Victor Moses of West Ham in the English Premier League (EPL) and Moses Daddy-Ajala Simon, who plays as forward for Belgian Pro League club KAA Gent.

Ibitoye sees these Moses as weapons to deal with Egypt as the Biblical Moses was a terror for Egyptian king, Pharaohs in the ancient days.

“We are ready to unleash our two Moses on the Pharaohs. While the Bible told us about only one Moses who unsettled King Pharaohs, this time around it will be two Moses who will go after Pharaohs,” Ibitoye said.

Meanwhile, the Eagles landed safely in Kaduna Tuesday afternoon to continue their preparation for the Egypt ties. They were lodged at African Continental Hotel. The team however trained at the Ahmadu Bello Stadium, Kaduna in the evening.

Contrary to earlier reported 4pm kick off time for the match on Friday, Super Eagles’ twitter handle twitted Tuesday night that the match will start by 5pm and it is official.