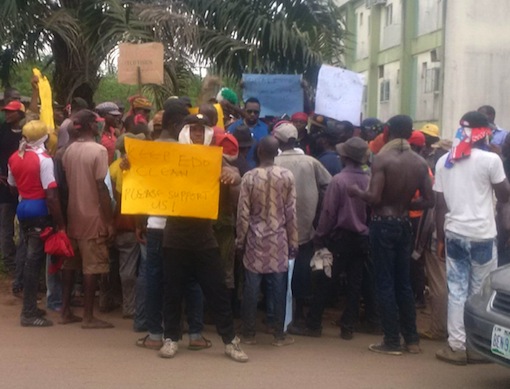 Independent waste collectors in Benin City, Edo state,‎ on Tuesday marched through several streets of the metropolis, to protest harassment of some of their colleagues by alleged officials of the state Ministry of Environment.

The protesters who carried placard bearing various inscriptions, decried what they described as unnecessary intimidation by the unidentified officials, who they accused of not only preventing them from carrying out their business peacefully and unhindered, but also caused them to be arrested by operatives of the Nigeria Police Force.

The local refuse collectors who pick waste using carts, said they were accused of impeding the smooth operation of the government-accredited waste managers, especially in densely populated areas with high waste production, like Sakponba, Uselu and Ekenhuan.

They lamented that no fewer than five of their colleagues were arrested and bailed with amounts ranging from N70,000 to N120,000.

One of the protesters, Isaac Monday, who claimed to have been in the business for over 14 years, said waste collection is their source of livelihood, as many of them were married with children.

“On March 4, some people came and said that they are contractors sent by the government to arrest us and that they want us to stop this work. We do not know the reason.

“That is why we have decided to seek the attention of the comrade governor so that he can ‎come to our aid; the oppression is too much.

“We have nothing to do; many of us use this business to take care of family, school fees and other things. Many of us have out voters card; we support the governor,” he said.

The father of five said however called on the state government to intervene on the issue.

Another protester, John Onyekachi, denied allegations that local refuse collectors engage in theft, adding that the business had been instrumental in making the state clean.

“God forbid bad thing! Anybody we see stealing is handed over to the government. If this is where I feed my family, will I misuse it? We clean the nation; we clean Edo State,”‎ he said.

Reacting to the protesters’ complaints, the General Manager of the State Waster Management Board, Mrs. Gilian Ochugbue, said that the collection of waste by the cart‎ pushers had been abolished, as their activities had contributed to the defacing of the moat at Victory Street, considered to be a natural waterway in the state.

She explained that there been media campaigns to sensitize the public on the need to desist from dumping refuse in the moat or face arrest during inspection, adding that the amount paid as bail by some of the collectors were paid to the court as a fine‎.

“Their business (waste collection) has long been outlawed. When they came here (Government House) asked them where they put their refuse (and) they said Victory moat. Victory moat is not for refuse; it is a natural waterway.

“This inspection I am talking about didn’t just happen yesterday; it happened several months back. But what we did was to begin to sensitize using jingles and that we were going to arrest.

“I was even surprised that they openly said that they were still in the business. They didn’t pay (fine) to us; they paid to the court. The court fined ‎them,” she said.

She, however, urged the cart pushers to apply as waste managers, through the agency to enable continue their trade legitimately.

“We are not interested in keeping them out of business. So, there is an advert showing free areas. I gave them a copy of the advert. I told them to organise themselves and apply as waste managers, so that they can get accreditation as waste managers. They will use the approved dump site,”‎ she added.