Politics And Rivers Of Blood by Okey Ndibe 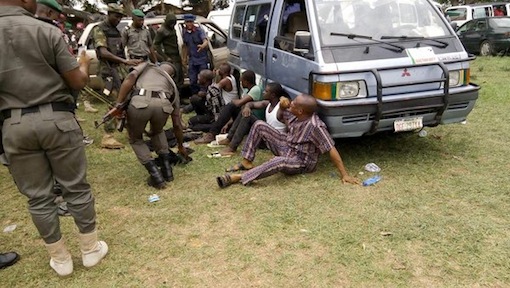 Some arrested persons during the Rivers rerun polls

Last Saturday, voters in Nigeria’s oil-rich Rivers State cast their votes in a rerun election to choose lawmakers at the state and national assemblies. At stake: three seats in the Senate, 12 at the House of Representatives, and 22 in the state legislature. As at this writing—early Sunday morning—the Independent National Electoral Commission (INEC) had yet to announce the winners. As for the real losers, one didn’t have to wait for INEC’s official declaration. There was no doubt: the big losers were the voters and people of Rivers State.

The election, like much of what happens in the name of Nigerian democracy, was an occasion for gratuitous violence, destruction and death. Last weekend’s exercise was formally called a rerun election. It was a case of fraudulent advertising; it should have been called by its proper name: a rerun war.

The media coverage of the election was unabashed in employing the rhetoric of war. A few days before the election, a Nigerian Army major and another soldier were gunned down when unidentified assailants ambushed their military patrol. A report in Thisday had a fitting headline: “Battle for Rivers Gets Bloodier, Army Major, Soldier Killed”. The report’s subheadings sustained the violent tone: “PDP, APC trade blame,” “court restrains military from deploying soldiers,” “Wike raises alarm over plot to arrest PDP leadership”.

The report’s opening sentence stated, “The battle for the control of Rivers State got bloodier on Thursday when a major in the Nigerian Army and a soldier were slayed in cold bold in the Abonnema creek in Akuku-Toru Local Government Area of the state by yet-to-be-identified gunmen.” Then this: “The fatal confrontation was blamed on tomorrow’s rerun elections, in which the ruling All Progressives Congress (APC) is slated to take on the Peoples Democratic Party (PDP) for the control of the oil-rich state.”

The fatal shooting of the two soldiers was an augury of what was to come last Saturday: D-Day for the Battle Royale. A sampling of newspaper headlines and reports should convey the idea that this was war, not voting. The Nation newspaper: “Rivers Rerun: 7 killed, SSG, Wike’s aide arrested by soldiers”. According to the paper, “The National and State legislative re-run elections in Rivers State spiraled out of security control at several hot spots yesterday, leaving at least seven people dead…[The police] confirmed 12 arrests as Governor Nyesom Wike leading the Peoples Democratic Party (PDP) and Transportation Minister Rotimi Amaechi leading the All Progressives Congress (APC) were locked in a fierce battle for the political soul of the oil producing state.” The Vanguard ran a headline, “Breaking: Heavy shooting in Gokana LGA in Rivers” The Nigerian Tribune proclaimed, “Election war in Rivers”.

The Sun carried one of the most extensive reports of the bloodbath. The paper’s caption, “Blood flows in Rivers rerun,” was illustrated with a photo of a man lying supine on the floor, a pool of blood spilling from his smashed head. The bloodied man told a repellently grotesque story. It was as if, in death, the expired man was inviting us to behold the image of what passes for democracy in Nigeria.

According to the Sun, “a soldier allegedly killed a young man who came out to cast his vote at Rumuokwuta area of Port Harcourt…In Nonwa, Tai Local Government Area, a voter, simply identified as Tombari, was shot dead by some hoodlums who stormed the area. The victim was said to be on queue, waiting to cast his vote before he was shot dead…Meanwhile, security men arrested over 32 persons for various offences. Of the number, 18 were arrested for being in possession of military uniforms and electoral materials.”

All that killing and rampaging and con artistry did point us in the direction of an ugly, inescapable, fact: that Nigerian politicians, especially the office seekers among them, hardly ever flinch from the idea of stepping through bloodied landscapes strewn with corpses to get to power. It also spoke to INEC’s inexcusable incompetence, and to the wretchedness of the Nigerian state and its security instruments.

When Americans want to express a surpassing depth of affection, they speak about loving somebody to death. I know it means the acme of self-disregarding love, expressed the heroic idea of willingness to—if need be—die for the object of their love, but I have always found the sound of it grating.

The desperadoes among Nigerian politicians seem to love their people, their supporters, to (the supporters’) death! And they, these desperate, mindless usurpers of lives and wills, have engineered exactly the dire conditions that enable them to have a steady supply of people to waste in pursuit of their depraved political goals. Thanks to the Olympian greed of a few among us, Nigeria has long become a shell of a polity, a space where (don’t even mention optimism) hope is an endangered species.

In such a space, there abound millions of the dispossessed whose specialty is to strike others dead—or to die trying—for a fee. In exchange for some pittance, ample swills of ogogoro, and a rolled joint, these thugs-for-hire are willing to kill or be killed, ready to lay ambush or be the targets of one, available to disguise themselves as police or soldiers in order to swoop down on polling booths, sweep up ballot boxes, and disappear. Rendered destitute by visionless, vicious political grubbers, these indigents subsist on perverse prayers. And for them there’s no prayer more perverse or urgent than a wish that an electoral season may roll around. For then, politicians would require their services as bullies and killers of an opposing politician’s people, else as corpses-in-waiting.

I’m willing to bet that none of the candidates in last Saturday’s elections consented to have debates with their opponents. None of them would have deigned to sit down to outline the precise agenda they propose to champion should they be elected. Few, if any, of them believe in elections as such. For them, the ritual called elections is rather hollow, a sort of inconvenience that must be subverted at all costs. And one refers here, especially, to the staggering cost in human lives.

Nigeria’s ideologically barren politics has begotten the kind of blood-fest we witnessed last Saturday in Rivers State. From the outset of this current mis-experiment in “democracy,” a certain kind of politician has been drawn to the political stage. The purport of the average Nigerian politician is to bask in indefensible, mindless splendor. And this desire for privilege and preferment appears to grow in inverse relationship to the country’s deepening impoverishment.

Tragically, the expanding misery in the country and the continuing domination of politics by some of the worst among us can only mean the normalization of the bloodbath we witnessed last weekend. There will yet be inheritors of power from that needless sacrifice of lives. I fully expect some of the winners to declare that God gave them power.

In the end, Nigerians must decide whether this aggravation that is misnamed elections, this self-serving ogre we’ve misbaptized democracy, can—or should—be sustained in their present toxic forms.