Wike condoles with Nigerian Army over death of major, soldier 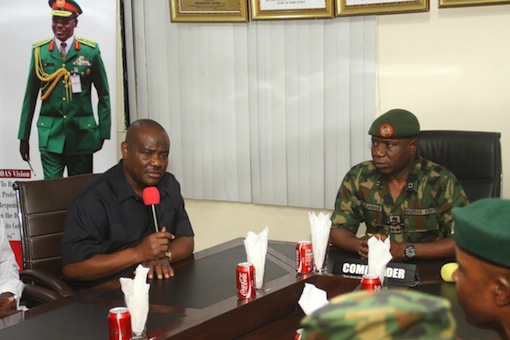 Governor Wike and the Commander, 2 Amphibious Brigade, Port Harcourt , Brigadier General Stephenson Olabanji during the condolence visit by the governor

Governor Nyesom Wike of Rivers has condoled with the Nigerian Army over the killing of a major and a soldier by sea pirates before the legislative rerun elections in the state.

Speaking during a condolence visit to the Commander of the 2 Amphibious Brigade, Brigadier General Stephenson Olabanji on Wednesday in Port Harcourt, Wike said that the death of the military personnel was regrettable.

He urged the Nigerian Army to ensure that those responsible for the death of the military personnel were brought to book.

The governor assured the Nigerian Army that the state government will continue to provide logistics support for them to carry out their functions of protecting the people.

He announced that the state government will participate in the burial of the personnel and also take care of their dependents.

Responding, Brig Gen Olabanji assured the governor that those responsible for the death of the military personnel will be brought to justice.

He said already two suspects have been arrested.

He thanked the governor for sharing the grief of the Nigerian Army at this difficult time.