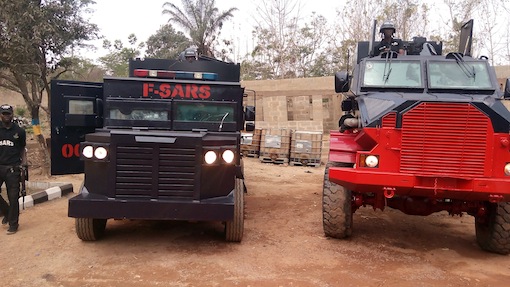 The officer in charge of the Special Anti Robbery Squad, Ogun state, CSP Gbenga Megbope, has single-handedly refurbished two abandoned Armoured Personnel Carriers (APCs) that had been kept at the Police Mobile Force Base in Abeokuta for several years.

Megbope who sourced for funds to put the APCs in shape, was appointed the officer in charge of the Ogun State rebranded SARS by the Commissioner of Police Ogun State, Abdulmajid Ali barely four months ago to resuscitate the squad which is the striking force of the command.

Abdulmajid Ali has since commended Megbope for his thoughtfulness and professionalism.

The police boss showered encomium on him after receiving and commissioning the two refurbished APCs. He then paraded some suspects at the SARS base, Magbon, Abeokuta, Ogun state.

Ali then charged other officers in various sections and departments to emulate CSP Gbenga Megbope and resuscitate or overhaul their various offices for efficiency and good service delivery.

The Commissioner of Police immediately deployed the APCs to Ijebu Ode and Sagamu areas of the state for aggressive patrol to clamp down on criminals, particularly cultists, kidnappers and vandals in order to have a sigh of relief in those parts of the state.