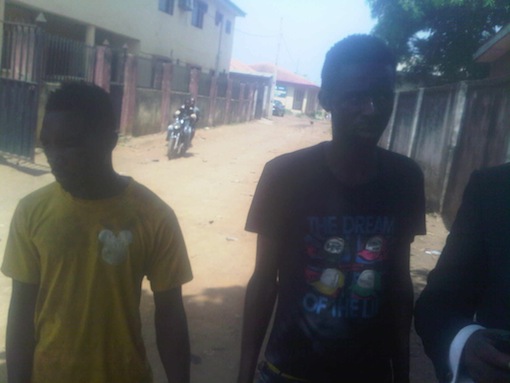 The principal manager of Premier Lotto popularly known as Baba Ijebu in Alimosho Local Government Area (LGA) has escaped assassination after one of his staff paid an undisclosed amount to assassins to snuff life out of him in Lagos state, western Nigeria.

The staff identified as Segun Oyesunmi allegedly contacted two suspects, Gbenga Olunuga, 35 and Paul Alimele, 35 and paid a certain amount of money so that they can rob and kill his boss, Alhaji Akin Abubakar, to enable him over the leadership of the business in the LGA.

The suspect were arrested and charged before a Magistrate’s court in Ejigbo with attempted robbery and murder under the Criminal Code.

While Segun Oyesunmi who provided every information to the suspects including where they would recover some money in Abubakar’s home and office is now on the run.

However, before the suspects would carry out the operation at Abule-Oki area of Iyana Ipaja in Lagos where Abubakar resides they were rounded up on a tip off.

The suspects who reside at Agbara area failed after they contacted Wale to join in the operation and to help them to acquire equipment for the operation.

While they were discussing the operation in a hotel, Wale who pretended to be interested leaked it to local vigilante in the area who contacted the police.

When they arrived Abubakar office at Abule-Oki in Iyana Ipaja for the operation, they were rounded up and handed over to the police at Gowon estate.

P.M.NEWS gathered that the police also recovered masks, rope, knives and other dangerous weapons from them as exhibits.

During interrogation, the suspects confessed that it was one Segun who was the staff of Alhaji Abubakar that sent them.

They said that Segun who is now on the run, contacted them and gave them the assignment to rob and kill Abubakar and whatever money they realized from him would be shared.

Olumuga revealed that Segun equally mobilized them and revealed where they would go inside Abubakar’s house and office to cart away some money which he realized from the lotto.

He said he initially went to Abubakar’s place to survey the place and to also identify him in person.

He said it was Wale that actually tipped the vigilante who arrested them when they arrived to carry out the operation.

Abubakar who was still shock over the matter, told our reporter that he employed Segun, rented an apartment for him and was paying his two children’s school fee.

When the suspects was arraigned, they pleaded not guilty to attempted robbery and murder.

The presiding Magistrate, Mrs J.O.E Adeyemi granted the suspects bail in the sum of N100,000 with two sureties in like sum.

They were remanded in prison custody at Kirikiri pending when they will perfect their bail condition.