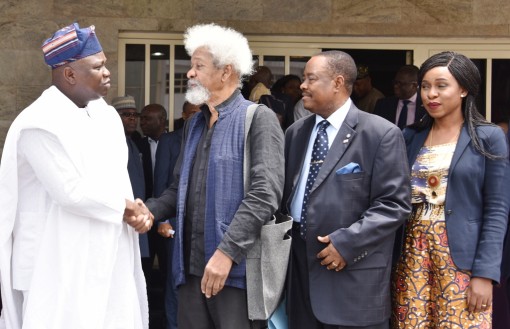 There is an uproar among prominent Lagos indigenes over the appointment of Nobel Laureate, Prof. Wole Soyinka as the co-chairman to head the Lagos at 50 Celebration Committee.

Lagos governor, Akinwunmi Ambode had appointed Soyinka and Rasheed Gbadamosi as co-chairmen of the Lagos at 50 celebration which comes up next year.

At a news conference at the weekend in Surulere area of Lagos, the indigenes also rejected the appointment of former Chairman of the Federal Inland Revenue Service (FIRS), Mrs Ifueko Omo-Okauro as the Chairman of a committee to manage the N25 billion Employment Trust Fund, ETF by Ambode.

Addressing the press, president of Eko Foundation, Prof. Smith said Soyinka’s appointment as the chairman of the committee for the celebration of Lagos state at 50 was a wrong choice and unacceptable.

Smith said successive governments in the state had retained the penchant of marginalizing those he called, “true indigenes” for the past 18 years, saying they would henceforth resist government decisions to give sensitive appointments to non-indigenes of the state.

“There are very many elders, octogenarians, septuagenarians, former governor, ministers, academic, public and civil servants and other indigenes both at home and in the Diaspora, that are more than eminently qualified to celebrate their state. Professor Wole Soyinka’s choice is an insult to the indigenes and he should decline to serve, to accord with his reputation as a protester, who has tirelessly protested wrongs and injustice in the better part of his adult life,” he said.

According to him, the choice of Alhaji Rasheed Gbadamosi, an indigene to co-chair the committee with Professor Soyinka was a deception and mischievous make-believe.

“We have decided to cry out, to enable us partake as our right and in accordance with extant laws, in the government of the state. We can no longer afford to keep silent and pretend that all is well when in fact there appears to be no future for the indigenes of this state and the generations yet unborn in the state.

“At the moment, we have six Ibos occupying seats in Lagos, in the Federal House of Representatives, non-indigene as a senator, several non-indigenes in Lagos State House of Assembly and in the executive council of the state. In the past, indigenes of other states have taken over our ministerial slot and occupy positions in various parastatals both in the state and at federal level. These are not replicated in any other state in Nigeria,” he added.

Smith said the implication of the abnormality was that Lagos indigenes would have to passionately appeal to the non-indigenes to secure employment for themselves and their children in their own land, adding that, indigenes would henceforth closely monitor and periscope the activities of the present administration in the state, warning that appointments in the state must conform with Federal Character Commission Act, the constitution of the country and other subsidiary legislation.

As at the time of filing this report, Lagos Commissioner for Information and Strategy, Steve Ayorinde has not responded to a call and text message sent to him.

It would be recalled that Ambode recently stated that “Let me assure Lagosians that the state is home to every tribe and ethnic group and nobody should give this disturbance of any ethnic coloration whatsoever. We are all brothers in Lagos and it shall continue to be like that.”