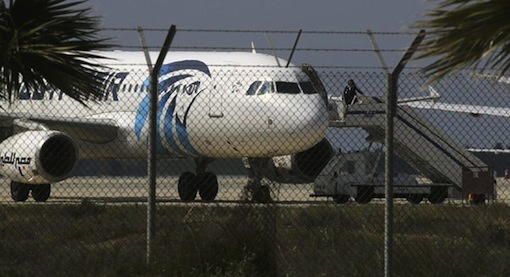 The hijacker of the EgyptAir Boeing A320 plane has been identified.

He is 27 year old Ibrahim Samaha, an Egyptian.

Flight MS 181 from Alexandria to Cairo was diverted to Lanarca in Cyprus. There were 80 people on board, along with the crew.

The lone hijacker was said to be wearing a belt of explosives.

How he got on the plane remains a bid puzzle.

Almost all the passengers on the plane have now been released. The crew and four passengers, foreigners are still held on the plane.

Latest report from Cyprus is that Samaha wants to be granted political asylum.

There was even a twist in the tale, with Cypriot media reporting that the hijacker has requested that a letter be sent to a Greek Cypriot girl, said to be his ex-wife.

Lanarca Airport has been closed.

A spokesperson for the Egyptian government, Hossam al-Queish said the hijacker wanted to travel to Istanbul but decided on Cyprus when he was told there was not enough fuel for the journey.

Al-Queish told the private CBC TV network that authorities could not confirm that the hijacker had explosives on him.

The channel showed a photo appearing to show Samaha standing inside an aircraft.

Hossni Hassan, the director of Borg El Arab Airport, said there were 26 foreigners on board, including eight Americans, four Britons, four Dutch, two Belgians, a French national, an Italian, two Greeks and one Syrian, with three other foreigners unidentified.

The nationalities of the four foreign hostages remaining on board were unclear.