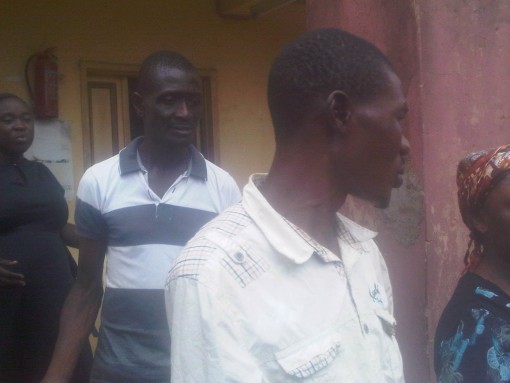 Nurudeen Sulamon (wearing white) escorted to prison by policemen behind him

A 28-year old man whose wife delivered has allegedly resorted to stealing baby food for the new born in Lagos State Western Nigeria.

Nurudeen Sulamon who has been arrested and charged before Magistrate’s court with stealing SMS Gold baby food under the Criminal Code has pleaded not guilty.

The incident happened on Easter Monday at Oduso close at a super market along Igando road in Ikotun.

According to police, Sulamon went to the super market and stole tins of SMS Gold baby food valued at N45,570.

PM NEWS gathered that when Sulamon went into the market, he did not know that there were CCTV cameras installed inside the hall.

After he stole the items and attempted to leave the place with the items, the security man on duty accosted him and he confessed.

He was handed over to the police at Igando division where he reportedly told the police that his wife delivered and needed baby food for the new baby.

Sulamon confessed that he had no money to buy the food which had caused a rift between him and his wife.

The police charged Sulamon before the court with stealing under the Criminal code.

The presiding Magistrate, Mr A.A. Fashola granted Sulamon in the sum of N50,000 with one sureties in like sum.

Sulamon was remanded in prison custody at Kirikiri pending when he will perfect his bail.