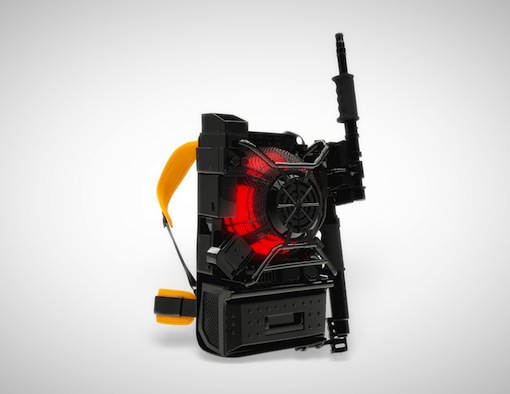 Sony Corporation has announced today that it has successfully perfected the Proton PackTM (#protonpack), a product designed to capture content from a parallel dimension.

The Proton PackTM is equipped with a state-of-the-art, miniaturized superconducting synchrotron, which accelerates injected protons from a hydrogen plasma cell. Superconducting temperatures are maintained by a liquid helium reservoir, and an active cryocooler ensures that operational time vastly exceeds that available from a cryogen dewar alone.

In development for over 30 years, the Proton PackTM benefits from the newest innovations from Sony Corporation’s acclaimed products.

Its embedded Sony 4K Ultra Short Throw Projector allows users to view captured matter in real time. Near Field Communications technology will make it possible to connect the Proton PackTM wirelessly to other Sony products such as BRAVIA® televisions and XperiaTM smartphones to view, forward, and share entities, redefining the terms image capture and screen grab. The Proton PackTM is water and slime-proof.

Sony President and CEO Kazuo Hirai commented “The perfection of the Proton PackTM, long a dream of the world’s greatest engineers since first pioneered by Dr. Egon Spengler of Columbia University, is an example of Sony’s relentless pursuit of innovation. It absolutely delivers the wow factor that is so important to our company mission.”