Why I suspended Commissioner for Works indefinitely - Wike 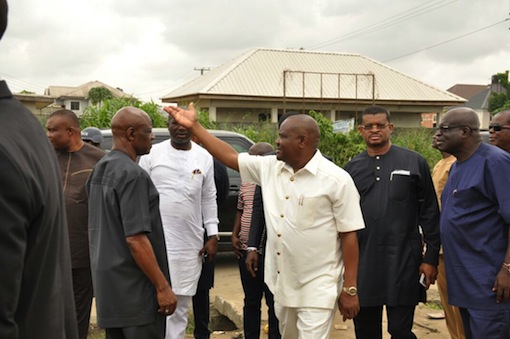 Wike along with others during the project inspection

Governor Nyesom Wike of Rivers State has explained that he suspended the Commissioner for Works, Kelvin Wachukwu, on April 1 because of his negligence, dereliction to duty, especially his failure to monitor projects effectively.

He gave the explanation while addressing journalists after inspecting some road projects today, Saturday, April 2.

Wike said he was at three project sites on Friday only to discover that the Works Commissioner failed to deploy site engineers to monitor the execution of the contracts from the standpoint of the state government.

“This is the time to deliver good governance to the people of Rivers and I will not tolerate negligence of duty. The failure to deploy site engineers to these three project sites means that the government and people of the state can be short-changed via poor quality delivery. The contracts have provision for site engineers and project vehicles. There was no reason why it was not enforced.

“If I am always at project sites supervising the quality and pace of work, there is no reason why the commissioner should not do the same. This goes to other Commissioners. We are in the era of governance and every official must work for the people of the state”.

Wike has also announced that the state government will construct a central abattoir in Port Harcourt, the state capital to cater for the needs of Port Harcourt City and Obio/Akpor Local Government Areas.

The governor noted that the new abattoir will have modern slaughter facilities and open stalls for small vegetable and other traders.

He also inspected ongoing construction work on the second Nkpogu-NLNG bridge and the Peter Odili road.

At the Nkpogu-NLNG bridge, Wike charged the contractor, MCC construction Limited to ensure quality execution of the project.