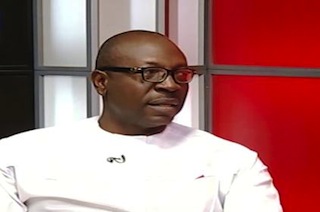 An aspirant of the Peoples Democratic Party (PDP), in the September 10 governorship election in Edo State, Pastor Osagie Ize-Iyamu, has accused the State Governor, Adams Oshiomhole, of allegedly voting over N30 billion for the newly created Edo State University.

The university is located in his home town, Iyamho, in Edo State.

Ize-Iyamu made the accusation at the weekend while speaking at the palace of the Onojie of Uromi, HRH Zaiki Edenojie II, where he formally declared his intention to run as governor in the governorship election.

He also accused Oshiomhole of neglecting other critical sectors of the state’s economy such as industrialization, agriculture, health, sports, youth empowerment, tourism and housing, while displaying theatrics by reconstructing federal roads and abandoning state ones.

‎He alleged that over N12 billion has been appropriated for a teaching hospital at Edo University and N1.6 billion spent to build a less than 150-room hostel in the institution.

The governorship hopeful said the state government has not come clean on the ownership of the institution though checks revealed that every kobo spent on the university was contributed by the state.

He further accused Oshiomhole of deceiving the Benin people as money has not been appropriated for the state College of Education, Ekiadolor, that was upgraded to a university at the same time the Edo University was created, just as he slammed the Governor for failing to employ teachers to enhance teaching and learning in the state.

“In the entire Edo secondary schools, we have only twelve physics teachers. In all government hospitals, we have only two general surgeons, two orthopaedic surgeons and one dermatologist, who is on contract employment.

“In the whole of Edo State today, there is just one quantity surveyor. One man that was brought from Kaduna, who does all quantities. He is the who that quantifies the job, supervises and okays payment. Corruption cannot be worse than that,” he alleged.

But reacting swiftly to the allegations, the Executive Director, Media and Public Affairs, Governor’s office, John Mayaki, described Ize-Iyamu’s statement on the Edo University as false and unreasonable.

“How much is the total budget for this year, that a chunk of N12 billion has been earmarked for the university alone? That claim simply defies logic and reasoning just as it does not add up.

“I can understand their blind and bland argument because the decision for the investment either outshone their paymasters or they intentionally joined the bandwagon for the sake of chewing their jaws,” he said.