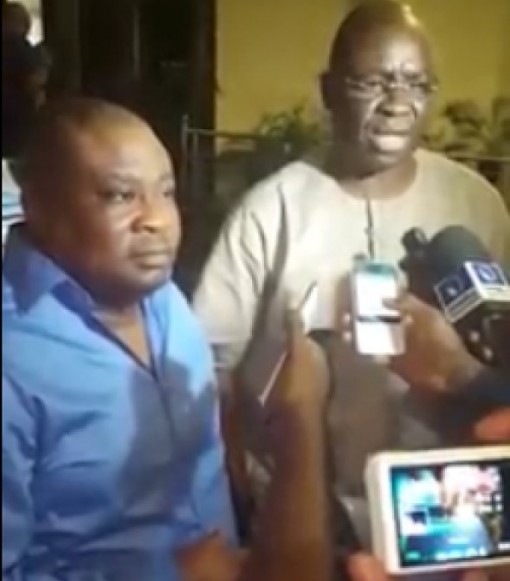 Immediate past Speaker of the Ekiti State House of Assembly, Dele Olugbemi, on Wednesday said he was the one who took former Secretary of the Peoples Democratic Party (PDP) in the state, Mr. Temitope Aluko, to Governor Ayodele Fayose of Ekiti State on Sunday.

Aluko had told the public recently that his purported reconciliation with Fayose on Sunday was stage-managed and that he was under duress to admit at a press conference same day that he had reconciled with his erstwhile friend and political ally.

But Olugbemi, in a personally signed statement on Wednesday said it was a lie that Governor Fayose stage-managed the reconciliatory meeting.

He noted that he (Olugbemi) and Aluko prostrated for Fayose to beg the governor to forgive Aluko.

Olugbemi, who said he was surprised that Aluko could address the press on Tuesdday and deny that he willingly attended the Sunday night meeting with Governor Fayose and that he spoke to the press under duress after the meeting, disclosed that he, out of genuine concern for peace took Aluko to Eko Hotel, the Lagos venue of the meeting.

“The existing cordial relationship between Aluko and myself brought us to a discussion that eventually led to the last Sunday April 3, 2016 meeting,” he said adding that Aluko cannot deny that he re-affirmed that Governor Fayose remained his mentor, leader and father and that all his previous actions were the devil’s work, and also that he was under spiritual attack when he was saying all those things against the Governor.

“At this point, Aluko stood up again, saying my mentor, my leader, my ‘egbon’, I am your boy, you know, I am your boy. Whatever step I have taken before now, forgive me. Aluko and myself prostrated again,” he narrated in the statement.

Explaining how the meeting was arranged and held, Olugbemi said: “before we agreed to meet in Lagos, I first suggested that the meeting should take place in Ekiti State Government House after the wedding of
the niece of Governor Fayose but Aluko said he was not too comfortable with the arrangement because of fear that he might be arrested.

“I re-assured him that the intention of the meeting was not to arrest, embarrass or humiliate him but to reconcile with Governor
Fayose, whom he called his mentor.

“In the morning Sunday, April 3, we agreed to meet in Lagos and I left Ekiti for Lagos. I got to Lagos at 12 noon; I lodged in a hotel at Magodo Area of Lagos.

“At 1 pm, Aluko called me to confirm my hotel room number and I gave it to him. Aluko called me back and promised to be with me within 20 minutes. Fifteen minutes later, he called me again, and I told him that I was barbing my hair at a salon in Magodo. He asked me to come out of the salon and we met. He came in a blue Ford Jeep together with his woman.

“I joined them in the car and we drove to my hotel room where Aluko stayed with me till 2 pm. He later instructed me to call the governor to ascertain the time and place of the meeting.

“All these I was doing because I wanted the crisis to be totally resolved.

“Immediately we were told of a new venue for the meeting, Aluko left my hotel room for Victoria Island and promised to come back at 7pm. At 7.45pm, Aluko came back to meet me at my Magodo hotel. At 9:00 pm, I called the governor to inform him of Aluko’s arrival. The governor asked if I was sure Aluko was with me and I said yes.

“The governor told to us to come to Eko Hotel and his friend will welcome us and that he would join us later. We drove in Aluko’s car, myself, a woman, a driver and my Personal Assistant.

“We got to the Eko Hotel at 9.50pm. We were taken to the hotel waiting room. Myself, Aluko, ADC, the governor’s friend entered the same lift to the fourth floor of the hotel.

“Inside the hotel room, we prayed and I opened the floor for discussion as agreed by Aluko. In my submission, I pleaded with the
Governor to forgive and forget about the previous comments and allegations made by Aluko against him since he is father to us all.
Aluko interjected and said that I should allow him to lead the talk.

“The governor said that the APC will fire back at Aluko because of the money he had received from the APC to malign him.

“Aluko promised the governor to dismantle all the structure he had put in place to attack the governor. The governor said he had forgiven him totally and that he should ‘go and sin no more’.

“The governor told Aluko that he would call soon and that he would need to study him (Aluko) very well within two weeks because he could go out of the meeting and say something different.

“The Governor also said it was better to let the press know that he had reconciled with Aluko to which he initially disagreed and later agreed to meet the press with the governor, and myself, which we did and the video recording is everywhere for the public to see.

“On Tuesday April 5, 2016, Aluko called me, sent a text message to me that things were falling apart as the party, and aide of the governor were attacking him; that he would renege on his promise. I advised him not to take any negative action or talk to the press if he wanted his already battered image to be rebuilt.

“Unfortunately, he did not listen to my advice and having come to deny what he willingly took part in, I have no option than to let the public know the true story.”