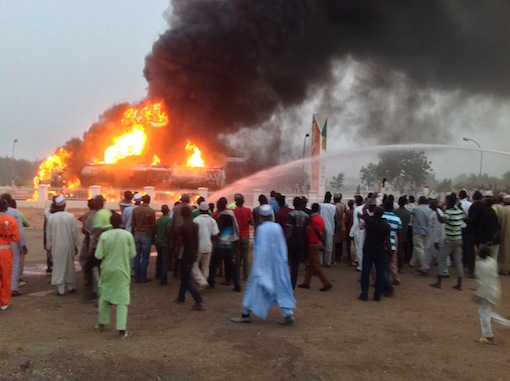 A raging night fire has burnt a father, his two daughters and a grandfather to death in two areas in Lagos, Southwest Nigeria.

Director, Lagos State Fire Service, Rasak Fadipe told PM News that an outbreak of fire was recorded at 5 Adebiyi Street, Somolu Oja
where the lives of a father and his two children lost.

He said the fire was caused by the storage of Petroleum Motor Spirit, PMS, in their home, saying that the family was cooking very close to where the fuel keg was kept when it exploded and burnt the house.

The names of the deceased were given as Shabi (father), Adura (16 years) and Mistura (18 years).

Fadipe said the Fire Station from Somolu responded to the fire outbreak, but lamented the tragedy.

Similarly, a grandfather was burnt to death after his grandchild lit a candle and went out to play. The candle fell and ignited a fire which consumed the apartment and the old man.

According to Fadipe, the tragedy occurred at 48, Oyedele Street, off Liasu Road, Egbe, in Ikotun area of Lagos, adding that the Ikotun Fire Station responded to the fire outbreak.

He advised residents of Lagos to desist from storing fuel in their houses as it might lead to fire outbreak and also warned against the use of candle stick at home.

He added that a bungalow building was also consumed by fire at 1, Sunny Avenue, Aswani Estate, while the Isolo Fire Station responded to the fire outbreak.