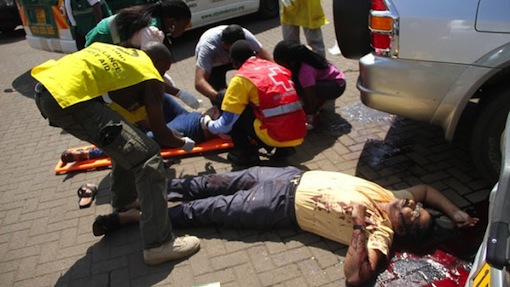 A ghastly auto accident has claimed the lives of three persons, including a pregnant woman in Edo State.

They were crushed to death at a burial ceremony by a tipper lorry at Osholo village in Etsako East local government area of the state.

Also, the driver of the tipper lorry and his conductor were said to have been set ablaze by an angry mob who witnessed the unfortunate incident.

The tipper driver who was said to be coming from Ekperi in Etsako Central local government area and heading towards Weppa in Etsako East, was said to have lost control and ran into the crowd at a burial ceremony, killing the pregnant woman and two others at the spot and injuring several others.

Eye witnesses said the driver and his conductor were attacked and set ablaze by the angry mob from Osholo community while they were making effort to convey the dead and the injured to a nearby hospital.

Angered by the action of the Osholo community, people from Weppa community in a reprisal attack, invaded Osholo and set several houses ablaze.

Calm was restored to the communities ‎by law enforcement agents who are still in the area.

The State Commissioner of Police, Mr. Chris Ejike, who confirmed the incident, said policemen were drafted to the warring communities as soon as the report got to the police.

Ezike who could not confirm the number of persons arrested, said investigation was ongoing .

It was gathered that several persons in Osholo community have been arrested by the police.